The Red Car Trolley is an attraction at the Disney California Adventure at the Disneyland Resort, which opened on June 15, 2012. The attraction features replicas of the Pacific Electric Railway (PE) "Red Cars" that once traversed much of Southern California, and provides transportation between Buena Vista Street and Hollywood Land, and near relocated to Avengers Campus in 2021.

The Red Car Trolley line has a total of four stops throughout Buena Vista Street and Hollywood Land, except for Avengers Campus.

The attraction features two stylized replicas of Pacific Electric rolling stock (similar in size to the Birney Safety Car) that were a familiar sight throughout Southern California from the 1900s to the 1960s. Both trolleys are battery-powered, with recharging ports at the Buena Vista Street and Sunset Boulevard stations, though overhead wires and trolley poles are used to create a more authentic experience. At both ends of the line, the trolley pole is turned, as it was on the real Pacific Electric system. Consequently, the overhead wires have forced Disney to modify parades, as removing them would be detrimental to theming; to date, two parades have been affected: the Pixar Play Parade, which saw the Ratatouille unit removed, and Paint the Night, which saw the Frozen float removed and The Little Mermaid float cut down in vertical size.

Red Car #623 is painted a solid dark red and features a simpler paint scheme than its counterpart, in reference to how PE cars appeared when delivered from the factory circa 1915. Its windows are painted in a green trim. Its number, 623, is a reference to the 600- and 700-series "Hollywood" cars built by the St. Louis Car Company for PE in the 1920s, as well as to the year 1923, when Walt Disney arrived in Los Angeles and started the Disney Brothers Cartoon Studio with his brother, Roy.

Red Car #717 is painted a bright red and features orange "butterfly wing" stripes on its sides, in reference to the paint schemes adopted by PE in the late 1930s, and how PE cars are typically seen in popular culture and films, such as in Who Framed Roger Rabbit. Its window trim is painted in the same red as the body, and its doors are painted orange. Its number 717, is a reference to the 600- and 700-series "Hollywood" cars built by the St. Louis Car Company for PE in the 1920s, as well as to the opening date of Disneyland, which opened on July 17, 1955 (7-17-1955 in US date and time format). The real Pacific Electric #717 remains operational at the Orange Empire Railway Museum, a museum and heritage railway in nearby Perris, California, which is also home to the rolling stock of Grizzly Flats Railroad, a backyard railroad built by Ward Kimball, one of Disney's Nine Old Men. 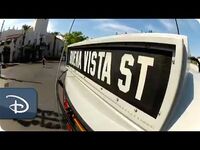