His adoptive family, his past glory days, tattoos, rivaling with Captain America, flirting with Melina, ranch dressing, winning arm wrestling, his own action figure of himself

Being imprisoned, Dreykov's betrayal, his past mistakes, being called a liar

The Red Guardian (real name Alexei Alanovich Shostakov) is a Marvel superhero that appears in Black Widow, played by David Harbour. He is Natasha's and Yelena's adoptive father.

Red Guardian was created by Roy Thomas and Sal Buscema.

The Red Room’s answer to Captain America, is a super soldier and spy who lived a lifetime of triumph during the Cold War. Alexei’s years of espionage are behind him, but he still considers himself the ultimate hero. He loves sharing his greatness with those around him—which these days includes fellow inmates in the Russian prison where he resides. Deep down—way deep down— he harbors a lot of guilt about his life as a spy, especially when it comes to Natasha Romanoff, whom he knew long before she became Black Widow.[1]

During the Cold War, Alexei Shostakov was given Superhuman Strength and made into a Soviet counterpart of Captain America called the Red Guardian. After undertaking a number of missions for General Dreykov Alexei, to his chagrin, was assigned to an undercover operation in Ohio. As part of the cover he lived with his "wife" Melina Vostokoff and daughters Natasha and Yelena. Although their mission was a success and they were able to recover the data they were after, in 1996 their cover was blown and the "family" had to flee to Cuba, where they were separated and the girls were shipped back to Russia and put into the Red Room Program.

Eventually, Alexei fell out favor with Dreykov, who had him put into a Siberian prison for life. Alexei remained there until 2016 when he was rescued by his "daughters", now both rogue Black Widows going after Dreykov but not knowing where he was. Alexei directed them to Melina, who still worked for Dreykov under Saint Petersburg, resulting in their "family" reuniting for the first time in 21 years. At her home, Alexei changed from his prison garb into his old Red Guardian costume.

As part of the plan to bring down the Red Room, they were captured and taken to the floating Academy that served as Dreykov's headquarters. Melina's knowledge of the facility enabled Yelena to escape, recover the antidote samples that were captured alongside them and release it into the group of Black Widows, instantly snapping them out of Dreykov's control. While Alexei fought the Taskmaster, Melina had destabilized the structure, and everyone was forced to make a frantic escape in which Dreykov was killed for good. After landing safely, Natasha said goodbye to her family and tasked them with replicating the antidote, so that the rest of the Widows across the world could be freed as well.

Red Guardian and the rest of the Winter Guard operated against the direct orders of their superiors to rescue and retrieve one of their comrades trapped in a special container appearing to be a bomb with the key needed to release him. Their operations soon earned the attention of S.H.I.E.L.D. which Nick Fury have sent the breakaway group of Avengers under Captain America to deal with them now while kept them in the dark of the Winter Guard's true intentions.

This led to clashes between the Winter Guard and Captain America's Avengers over the key until at the facility where they fought began to collapse and threatened to destroy the nearby village, forcing both groups to work together until Crimson Dynamo and Falcon released Radioactive Man from his prison and melted the collapsing facility down.

After the crisis has been averted, the Winter Guard then revealed the true purpose that they did everything they can to save their fellow comrade and wouldn't want Radioactive Man as a weapon to be used, something that the Avengers can relate with the Hulk. 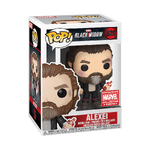 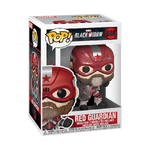