Butch Cavendish eating her leg
Red Harrington is a character in Disney's 2013 film The Lone Ranger.

At some point in her life, she was a ballerina who lost her leg to the cannibalistic Butch Cavendish.

In The Lone Ranger Play Set for the first Disney INFINITY game, Red appears as a mission giver, asking the player to collect certain items to trade for something else. She is unlocked in the Toy Box by opening one of the Character Chests or the Avatar Vault. In the second and third games, she is unlocked either by using blue sparks to purchase her, or by placing John Reid's figure on the Disney INFINITY base. 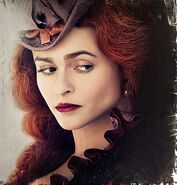 Retrieved from "https://disney.fandom.com/wiki/Red_Harrington?oldid=3767008"
Community content is available under CC-BY-SA unless otherwise noted.