Disney Wiki
Register
Don't have an account?
Sign In
Advertisement
in: Characters, Pirates of the Caribbean, Pirates,
and 13 more

Not to be confused with the former Redd Rockett's Pizza Port.

“Oh, quit your cluckin'. The gentlemen want the rum! Dontcha, boys!"”
―Redd, during the Auction.

Redd, also known as the Redhead, is one of the characters in the Pirates of the Caribbean ride.

Redd was a woman Irish background who inhabited the Caribbean during the 18th century. She came to be a pirate and found employment as a member of the crew of the Wicked Wench, notably in working as a smart-mouthed gun for the Auctioneer.

At some point in the 1710s, the Wicked Wench travelled to the port of Puerto Dorado on the island of Isla Tesoro in a race for the island's legendary treasure with their rival Captain Jack Sparrow. As the crew ransacked the town, the slimy Auctioneer and his cronies (including Redd) began rounding up the towns-people in-order to auction off their goods to members of the crew. The Auctioneer was particularly interested in selling a flock of chickens however Redd consistently undermined him by instigating the auction's attendees to demand the rum for sale instead.

The Wench's crew managed to get their hands on the treasure following the raid and would store it in a lair they built within Isla Tesoro's grottos. The treasure would provide Redd in particular with a good amount of wealth and luxury; even having a portrait of herself made enjoying the fruits of the treasure. It is unknown if she succumbed to the curse of the treasure that the rest of the crew did.

In the original attraction, Redd (who was not yet named and colloquially known as "The Redhead") was a citizen of Puerto Dorado who was kidnapped and lined up to be auctioned off in the "Take a Wench for a Bride Auction".

During the auction, the auctioneer was attempting to auction off a bride who none of the pirates placed money bids on due to her being over. Much to the Auctioneer's dismay the only woman they displayed any interest in was Redd as they constantly shouted out at the Auctioneer, "We Wants the Redhead" only for him to refuse to sell her yet and harass Redd for being so flirtatious with the pirates. It was implied at the beginning of the ride (which takes place in modern day when the pirates are all dead) that she did wind up becoming a pirate herself as displayed on a portrait in the Crew's Quarters called "Of Things to Come" which shows her enjoying a pirate's life.

This incarnation of the scene was removed in 2017 due to its misogyny, fat-shaming, glamorized light-hearted portrayal of human trafficking, and implications that the Redhead enjoyed being objectified while ultimately advantaging from being the victim of sex-crimes. The Redhead was thus updated to become one of the pirates herself. The "Of things to come" portrait does still appear within the crew's quarters scene albeit with its misogynistic connotations removed. The original Redhead animatronic from Disneyland currently sits at the Walt Disney Archives.

The modern incarnation of the Redhead seems to be inspired by the historic pirate, Anne Bonny (1697-17XX) AKA The Pirate Queen of the Caribbean. The original incarnation of the character as designed by Marc Davis was actually based off of his concept art for Anne Bonny so this was keeping in theme.

Bonny was an Irish-American red-head woman who was born into a wealthy but cruel family which she left to try and marry a pirate. This pirate betrayed Anne and tried to sell her as a bride to other pirates only for Anne to escape with the assistance of her friend Pierre, the owner of an LGBTQ pirate business. Bonny disguised herself as a man and come to be a crew-mate aboard a vessel known as The William under the pirate captain John "Calico Jack" Rackham (1682-1720) who she came to be a lover to. Bonny would rise through the ranks of the ship and come to serve as the unofficial captain of the William under Calico's command.

Anne would come to become romantic partners with a woman named Mary Read (1685-1721) who was formerly an orphaned girl from the streets of London who disguised herself as a man to join the British Navy. Read was aboard a ship captured by the William and one of the crew-mates to change allegiances to the pirates. While aboard, both Anne and Mary attempted to seduce the other while both presenting as men only for both of them to reveal to the other that they were women. As a couple, the two began openly presenting as women and came to be known as the Pirate Queens of the Caribbean with Anne as the effective captain of the William, the two becoming high-ranking members of the Flying Gang of Nassau, and were known for humiliating misogynistic men before killing them.

Eventually Bonny, Read and Rackham were all captured by the British when their ship was ambushed. Allegedly, Bonny and Read were the only pirates fighting as the rest of their crew (including Rackham) hid in fear prompting the Queens to start shooting at the hiding places of their own men for motivation. The pirates would be sent to the brutal anti-pirate colony of Port Royal on Jamaica where Read and Bonny escaped the gallows by claiming that they were pregnant. Mary died of illness in captivity while Anne managed to perform an escape, apparently confronting Jack before leaving and telling him off for his cowardice before leaving him to be hanged by the British. Anne Bonny disappeared off the face of the Earth after this with her fate unknown.

During the Crew's Quarters sequence of the crew's quarters in the Ghostly Grotto, a portrait of Redd can be spotted above the bar area where she is shown enjoying wine and fresh fruits.

Redd is one of the pirates serving Captain Barbossa aboard The Wicked Wench when it ransacks the city of Puerto Dorado on the island of Isla Tesoro in search of its treasure. Redd appears half-drunk in the Auction scene of the attraction where she is shown to be one of the pirates enforcing the auction which is selling off goods stolen from the people of Puerto Dorado. Throughout the auction, the Auctioneer attempts to auction off a coop of stolen hens to no avail as the pirates only want to buy rum. Redd constantly interrupts the Auctioneer and encourages him to sell rum as no-one cares about purchasing the hens.

Redd's current form first debuted at Disneyland Paris in 2017, when the animatronic was refitted with a pirate outfit and a rifle. This version of Redd is silent and overlooks the auction while wielding a rifle that she does not use like her American counterparts.

As of the time of writing, Tokyo Disneyland still has the original auction scene in which Redd is a victim of human-trafficking.

Redd had a small cameo in this live-show at Disney's Hollywood Studios, in a projection. She and Captain Jack Sparrow were playing, until he whispers something to her. She slapped him, telling him that she wasn't that kind of girl. She slapped him, again, when he said something inappropriate, before leaving the ship.

Redd can be met in the Parks as a meetable character. At Disneyland, she can be found in New Orleans Square.

Her post 2018 incarnation appears as a ghost in Sea of Thieves: A Pirate's Life. She appears at the Auctioneer's auction when players search Isla Tesoro for a treasure belonging to Jack Sparrow which was stolen by the undead Barbossa. In this video-game, she is referred to as, "Captain Redd".

She appears in the recreation of the Magic Kingdom attraction in Minecraft's Walt Disney World DLC. Instead of rum, she says that the sailors want gold. 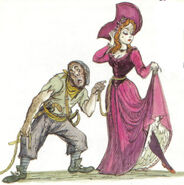 Concept Art of the Redhead by Marc Davis

The Redhead at the Magic Kingdom

The Redhead at Disneyland

A plush of Redd from the Disney Wishables line