Jamestown, Virginia
Redfeather is a talking turkey who was to appear in Pocahontas as one of the title character's sidekicks.

Redfeather was dropped from the film for two reasons--the death of his intended voice actor, John Candy, and the decision to have the film's animal characters be mute. He was ultimately replaced by Meeko.

At Disney's Hollywood Studios, Redfeather makes an appearance with Meeko and Flit in the Drawn to Animation presentation at The Magic of Disney Animation to help demonstrate the process of character creation. When the host mentions the decision to bring in Meeko and that the turkey "became an entree", he gets transformed into a turkey dinner and Meeko starts chasing him.

Redfeather interacting with a talking Percy in a pencil test. 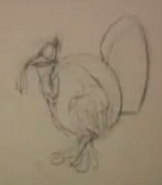 Redfeather as he appears in "Drawn To Animation" 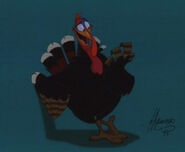 Redfeather with Pocahontas and Grandmother Willow