Disney Wiki
Register
Don't have an account?
Sign In
Advertisement
in: Disney California Adventure attractions, Up, Brother Bear,
and 3 more

March 12, 2020 (original)
Redwood Creek Challenge Trail is an attraction located at Disney California Adventure located in the Golden State area's Grizzly Peak Recreation Area. It serves as the park's counterpart to Tom Sawyer Island. It utilizes elements from Brother Bear and Disney-Pixar's Up.

In 2019, it received a Halloween overlay in the form of Villains Grove as part of the Oogie Boogie Bash event.

Redwood Creek Challenge Trail opened with the park on February 8, 2001. In October 2003, the area received a Brother Bear overlay, including the show "The Magic of Brother Bear" at the Alwahnee Camp Circle and the addition of Kenai's Spirit Cave in Hibernation Hollow. Kenai and Koda would both appear for meet and greets, as part of the show, and as a large wood sculpture at the entrance to the area.

In the summer of 2011, the Brother Bear theming would be mostly stripped away as a theme based on the Wilderness Explorers from Up took its place. Guests were now invited to complete activities to earn merit badges and achieve Senior Wilderness Explorer status and Russell and Dug appear for meet and greets and as part of a ceremony at the camp circle. Though the Spirit Cave would lose its signage reference to Kenai, its interior remained the same with the bear and handprint logo and the totem animations, though the original name would later be restored.

On April 30th, 2021, Disneyland Resort reopened after being temporarily closed due to the COVID-19 pandemic; however, Disney California Adventure announced that all rides and attractions remained closed.

The camp circle is a small amphitheater that has housed various shows over the years. Surrounding the amphitheater are various woodcarved animal figures corresponding to different Native American stories.

In its first few years, it served as a location for telling Native American stories, before becoming home to "The Magic of Brother Bear" in 2003. An interpreter retold the story of the film with a talking woodcarving of Rutt and Tuke chiming in and a totem ceremony was performed as well. In 2011, it would be replaced with the Wilderness Explorer Ceremony, where children who completed the Merit Badge activities would receive their Senior Wilderness Explorer rank.

Originally known as Hibernation Hollow and featuring only some Native American pictograms and the sounds of a bear, it would be retrofitted into Kenai's Spirit Cave in 2003. Pressing your hand against a bear/human print on the walls would cause lights and rumbling sounds to play as an animation depicting your spirit animal would play. Spirit Animals include the loving and strong Bear, the wise and loyal Wolf, the intelligent and brave Eagle, the dependable and honest Moose, the hardworking and industrious Beaver, instinctive and strong willed Salmon and the curious and adventurous Skunk.

The only changes it would receive would be removing Kenai from the name and adding Kevin to the sign, described as "loves chocolate". 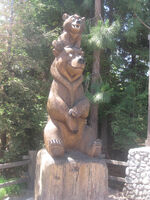 Kenai and Koda carving at the trail entrance

Spirit Cave Animal listings with the addition of Kevin 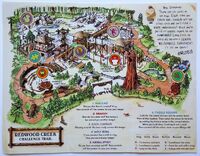