Reginald Eurias Cathey was an American film and television actor best known for his roles as Norman Wilson in The Wire, Martin Querns in Oz, and Freddy Hayes in House of Cards. He portrayed Dr. Franklin Storm in the 2015 film, Fantastic Four.

For Disney, he played James Lucas, father of Luke Cage, in the Netflix series of the same name. He also voiced Captain Quaid from Tangled: The Series. Both of his roles in each series were released posthumously. 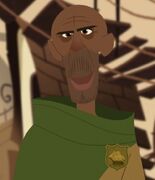 James Lucas
(Marvel's Luke Cage)
Add a photo to this gallery
Retrieved from "https://disney.fandom.com/wiki/Reg_E._Cathey?oldid=3796731"
Community content is available under CC-BY-SA unless otherwise noted.