Disney Wiki
Register
Don't have an account?
Sign In
Advertisement
in: Characters, Phineas and Ferb characters, Males,
and 13 more

Reginald "Reg" Fletcher is a recurring character of the animated TV show, Phineas and Ferb. He is a former daredevil known as The Flying Fishmonger. He is the grandfather of Ferb Fletcher, step-grandfather of Candace Flynn, and Phineas Flynn, husband to Winifred Fletcher and father of Lawrence Fletcher. He speaks in a heavy Leeds/British accent. As a grandfather, he suffers from many aches and pains, such as lumbago and a bad trick knee, yet he is still very spry and active as ever. His grandchildren will visit him and Winifred at least once a year, and he lives his life retired in his London home lying next to the former castle of the Black Knight of Worcestershire.

As a daredevil in his youth, Reg was able to jump to a great altitude over any object or person. When re-creating his final jump in his elderly age, he still displayed the same amount of skills, including good handling and maneuvering. He can also skateboard very well. ("The Flying Fishmonger", "Picture This") When he was young, Reg was relatively hotheaded. As an adult, he lost this trait and became more cautious and casual. He enjoys relaxing and a comfortable life, though he is still just as reckless and has not lost his sense of adventure. He is also very intelligent, a trait passed to his son, Lawrence. Reg carries a deep cockney accent which is a cause of confusion to his grandchildren; his phrases and choices of words are a source of unending confusion for Phineas, who requires Ferb to translate what he can. ("The Flying Fishmonger", "A Hard Day's Knight", "Elementary My Dear Stacy")

As of the summer of mid-to-late 2000s, Reg and his wife live comfortably in a medium loft in Worcester next to the legendary castle of "the Black Knight," which Reg took interest in. ("The Flying Fishmonger", "A Hard Day's Knight", "The Monster of Phineas-n-Ferbenstein")

Once while visiting his grandchildren in America with Winnifred, he told Phineas and Ferb about his days as a daredevil. Inspired by this, they promised to help re-dig McGregor's Gorge and help him fulfill his last jump. After doing so, the main problem became an issue again, but Phineas realized the source was the dullness of the theme music and pumped it up. Together, though in a rather roundabout manner, they jumped the gorge to a roar of approval from the crowd. ("The Flying Fishmonger")

Later in the visit, during the pouring rain, Reginald told to his grandchildren the legend of ancestor Ferbgor and his master, Dr. Phineastein. His senility caused him to forget doing so immediately afterward. ("The Monster of Phineas-n-Ferbenstein") When his grandson Ferb left his skateboard at Reginald's house, Reg became quite the expert at using it. However, when Phineas and Ferb attempted to get the board back, they unknowingly turned their grandfather's feet backwards. Reg was happy about this as he could finally see where he had been. It is not known what happened afterward. ("Picture This")

When Reginald was a child, he began working alongside his father at his fish and chips shop. He worked hard and appeared to enjoy himself. His love for his dad caused him to do all the tasks his father needed, including wearing a fish suit to promote the shop. ("The Flying Fishmonger") In his teen years, Reg, as a daredevil, jumped over his mother and her friends at a tea party; his mom appeared to allow it and, due to her professionalism, at least acted as if she did not mind. ("The Flying Fishmonger")

Winifred is nicknamed "Winnie" by Reginald as somewhat of a "pet name." The two are happily married and live comfortably in a loft in England. Winifred apparently wears plugs in her nose because of the smell of Reg's feet. ("A Hard Day's Knight," "Elementary My Dear Stacy", "Picture This")

Lawrence is Reg's son. The two seem to have a very good relationship, as Reg allows Lawrence and his children to come and stay at his loft in England, and vice versa. The two possibly engaged in fishing trips together. ("A Hard Day's Knight," "Elementary My Dear Stacy," "The Monster of Phineas-n-Ferbenstein," "The Lake Nose Monster")

Reginald's grandsons, Phineas and Ferb, greatly enjoy his old stories. Every time they visit him or vice versa, he regales them with multiple tales, such as his youth as a daredevil or a tale from their family's Victorian years. The two boys always enjoy these stories. They also enjoy doing other activities with him, such as taking part in a medieval joust. They care for him enough to recreate his failed jump and help him succeed this time. ("The Flying Fishmonger," "The Monster of Phineas-n-Ferbenstein," "A Hard Day's Knight") His granddaughter, Candace Flynn, does not enjoy visiting with Reg and his wife, although she always finds some source of entertainment from these visits. ("A Hard Day's Knight," "The Flying Fishmonger," "Elementary My Dear Stacy") 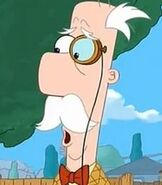