Almost looks like Magica De Spell, but is a shorter duck with smooth black hair, and wears a long black dress and star clips in her hair

Have her people prosper.

"Come on Reginella! Prove that you are a true queen!"
Reginella (roughly translated as an hypocorism expressing endearment of the word "queen") is the queen of an alien civilization and a love interest to Donald Duck. They love each other, but their different responsibilities keep them apart.

Donald is deep-sea diving when he is captured and taken prisoner by alien ducks who live in a bubble under the sea. Reginella understands that he will never be one of them and decides to send him back to the surface. Donald thinks that the experience was a dream, but then sees the medallion that Reginella gave him as a token of love. Donald then sadly throws it in the sea.

Reginella later finds the medallion thrown by Donald Duck, and all his feelings toward him return in her mind. Meanwhile her people's scientists tell her that her home planet is going near the earth for a limited period of time, so they could go back to home. Reginella urges the scientists to build a rocket so they can return home. The rocket is almost ready, but to finish it is needed an electronic piece easily available on the surce. So all the citizens of her civilization donate to her, a part of their future life to permit her to get to the surface. Reginella buys the partm but while she is crossing a park to return to her people she finds Donald Duck, their respective feeling suddenly emerge again and they escape in a chalet in the outskirts of Duckburg.

Meanwhile Pacificus is getting slowly away, so Reginella's people try to return home without their queen, but because this causes some discord between them the machines refuse to work, situation get starkest also because their protective bubble is crumbling for the proximity of Pacificus and start to fall. Reginella hears to the radio about some strange tellurics movement around the Silent Bay (where her people live) so, moved by sense of duties, write a farewell letters to Donald Duck and returns home with her people.

“Duty, time, fate, all tends to divide us and indeed it does, but...sentiment knows no border and join us as if I had my hand forever hold to yours . Farewell!”
―Reginella's letter

During Reginella's absence her planet Pacificus (where her people can't use physical violence) got enslaved by the army of the evil Bingo. Upon Reginella arrive Bingo fall in love with her and want to marry her, after Reginella's indignant refuse he imprison her in a Tower and force her to watch the people being whipped while being in slavery. Reginella so accept to marry Bingo with the condition to permit to her people to gather one time . During the gathering secretly got chosen 1 young strong man to go to earth and get the help of Donald Duck, for this purpose all citizens donate to him part of their future life. He goes on earth and inform Donald Duck of the situation, the two returns just in time to avoid the marriage and Donald Duck thank to his salt-loaded arquebus kick out Bingo and his army. Donald Duck is acclaimed as an hero and a new age of peace and serenity seem to start for Pacificus. Finally Donald Duck and Reginella can be together and they hopes to stay together forever. But Donald Duck action inspired violence in the inhabitants of Pacificus, especially to the young ones , who start to plays with fake wooden-made rifles. So Reginella decides sadly to send Donald Duck back to home while he was sleeping to preserve her people's purity and give him a letter. Donald Duck once at home upon awakening read the letter and sadly decide to burn it hoping to forgot about her.

The fourth official story where she appears is called Reginella e la minaccia terrestre (Reginella and the earthling menace). Reginella has to decide if make his planet remain in the same galaxy of Earth or change rout meanwhile in the earth a travel agency is suffering an economical crisis,so they send an employee in the space to find new destination. He discover Pacificus and the fact that every day passed on Pacificus equivale to one second in the Earth. The owner of the travel agency build a tourist village in the planet and bypass Pacificus's people disapproval bribing them. Terrestrial flood the planet but Donald Duck, thank to a loan of 21'000 dollars gave to him by his uncle Scrooge, reach the planet. Reginella succeed into making Donald Duck director of the vacation center and seem possible a peaceful coexistence between the two peoples. All seem go well and Donald Duck and Reginella can stay again together but suddenly some Pacificus's inhabitant are starting to get ill and sick. Reginella discovers that the cause of the illness is the earthling's presence, she refuse to ask Donald Duck for help because doesn't want to put him in danger so use a tool to scare all the earthlings and make them escape. Only Donald Duck remain and want to ask information about Reginella, but is denied to him the meeting. In fact for using the tool Reginella consumed a lot of her energy so is reduced to little more of a shadow. The Decanus send away Donald Duck and Reginella order to move her planet away from Earth.

The fifth official tale and the (at moment) the last of the saga is named Paperino, Reginella e il temibile Vampirione (1994) (Donald Duck, Reginella and the fearful Vampirione). After finally Reginella seemed to have find tranquility (and recovered even a better looking) her planet get raided by another alien race that come from the planet Vampirio and is ruled by Vampirione. Reginella again ask help to Donald Duck who, thanks to financial help of his uncle Scrooge, reach Pacificus and easily defeat with his salt-loaded arquebus but is forced to accept a duel challenge which could cost in case of defeat the death of the entire Pacificus planet. Donald duck fight but Vampirione cheats, so Reginella use some of her little energy to grant Donald Duck the victory and doing so collapse. To do not make the health of the queen get worse Donald Duck is sent home and with a chemical liquid made to forgot what happened. 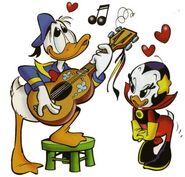 Reginella being serenaded by Donald Duck, by Giorgio Cavazzano.

Aku Ankan taskukirja #130 (Finland)
Add a photo to this gallery

Retrieved from "https://disney.fandom.com/wiki/Reginella?oldid=3498666"
Community content is available under CC-BY-SA unless otherwise noted.