Tippe
Rei is the deuteragonist of the manga series, Kilala Princess. He is the crown prince of the mystical land Paradiso.

After his kingdom was rebelled by a collection of dangerous robots, he is brainwashed by Valdou and lost his memories as a prince, and is sent to other countries to search for the princess of the Magic Tiara who is meant to save the kingdom. It isn't until after his adventure in Atlantica that he realized he was a prince and started questioning his quest.

When he confides in Valdou about these questions, the loyal follower reveals his evil intentions and has Rei held captive. He eventually escapes just in time to witness Valdou shoot Kilala in the back (which enacted her travel to Cinderella's world). They are eventually both brought back to Paradiso. On the way, the automatons controlled by Valdou prepare to brainwash Rei. Kilala, however, saves him and brings him to the world of Beauty and the Beast. He is shocked to learn that his betrothed one, Sylphy, has followed in pursuit and is willing to go through any measure to secure her place as Rei's bride. 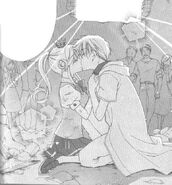 Retrieved from "https://disney.fandom.com/wiki/Rei?oldid=4451961"
Community content is available under CC-BY-SA unless otherwise noted.