The attraction was revealed as part of internet rumors of an expansion of Walt Disney Studios Park's Toon Studio area. Other rumors about the expansion included a reincarnation of the popular Toy Story Midway Mania! attraction to be put in the operating Toy Story Playland. Ratatouille: L'Aventure Totalement Toquée de Rémy is one of the biggest additions to Disneyland Paris; its show building is similar in height to that of the expansive Pirates of the Caribbean attraction at the neighboring Disneyland Park, and cost an estimated $270 million to complete.[3] Following the initial rumors, articles on the Internet surfaced concept paintings, ride blueprints, and images of the first phases of construction, confirming that there would be such an attraction.[1] The attraction was partially conceived by the Imagineering team as a modern equivalent to Mr. Toad's Wild Ride with significantly more physical sets in early modelling stages before projection media was deemed more practical.[4]

The attraction was formally announced in March 2013 at the Euro Disney S.C.A. annual shareholders meeting, with construction completed in June 2014. On June 21, 2014, the attraction was officially inaugurated by the president and CEO of The Walt Disney Company, Bob Iger. The attraction fully opened to the public on July 10, 2014.

On July 15, 2017, it was announced during D23, due to popular demand, the ride would come to Epcot's France Pavilion at Walt Disney World Resort in Orlando, Florida.

On October 12, 2020, the opening of the Epcot version was delayed to October 1, 2021, since the opening had already been postponed indefinitely following the closure of the park due to the ongoing COVID-19 pandemic.[5]

In August 27, 2021, following Disneyland Paris' reopening, Walt Disney Studios Park announced that their version of the attraction was set to become part of Worlds of Pixar.

The attraction's exterior is that of Gusteau's restaurant, and the surrounding buildings of the Parisian plaza.

After queuing on the rooftops of Paris, guests board their "ratmobiles" and find themselves "shrunk" down to rat size on the roof of Gusteau's restaurant, with Rémy and his imaginative Chef Gusteau trying to decide what meal they shall serve the riders. After deciding on their famous Ratatouille dish, Rémy and the riders fall through a swinging roof glass-pane, winding up on the restaurant kitchen floor. This starts a chase sequence with Rémy leading the riders and other rats away from the cooks, passing through the cold room and under the hot oven.

The little group eventually ends up in the dining area, attracting unwanted attention from customers and causing a riot. Chef Skinner tries to get rid of the rats and the guests, while Chef Linguini tries to help them escape into a nearby vent. The subsequent escape in the walls is undermined by Chef Skinner's angry attempts to grab the rats or the guests through the venting grids. In the end, the little group makes it safely to Rémy's kitchen, where the cooking of the Ratatouille is ongoing.

The ride ends at the Bistrot Chez Rémy restaurant, where guests are bid farewell by the rat colony (and the imaginary Gusteau) and invited to join in.

The attraction uses LPS trackless ride technology, similar to Pooh's Hunny Hunt (in Tokyo Disneyland) and Mystic Manor (in Hong Kong Disneyland), which uses rat-shaped vehicles to automatically slide across the ground with no track. It also contains 3D dome segments of the ride that the vehicles ride into. 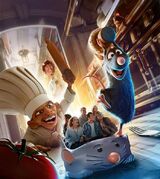