Her propellers broken
Rescue Ronda is a toy helicopter that can really fly in the sky with her rotor propellers as she is built with a rescue line as Ronda once helped Stuffy when he fell and when Lambie was floating in the air by a balloon, Ronda told the toy what to do when her propeller cracked.

Rhonda as she appears in The Doc Files 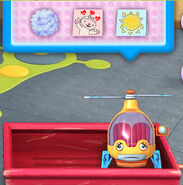 Ronda as she appears in the game Doc's Summertime Clinic