Dorothy Gale (Fairuza Balk) returns home to Kansas, but no one believes her story about the Land of Oz. She soon starts suffering from insomnia and Aunt Em sends her to the hospital. She is put under the care of sadistic Dr. Worley and cruel Nurse Wilson. The former performs horrible experiments on children using electric shock therapy there.

Just before Dr. Worley can perform his experiment, a storm knocks out the power, leaving Dorothy unattended. Thanks to the help of a mysterious girl, who she met earlier, she escapes into a chicken coop that sends her back to Oz, which is a very different place from when she was last there. Her pet hen, Billina, who was having trouble laying eggs back home, can now talk. She and Dorothy escape from their stranded state of the Deadly Desert, but unfortunately a rock discovers her presence and reports it. Meanwhile, she and Billina hope to visit her old friends. However, upon discovering her old house (the one that landed on the Wicked Witch of the East the first time she was there), she finds the Yellow Brick Road in shambles. It leads her to the Emerald City, which is in ruins, no longer green, and its citizens, including the Tin Woodman and Cowardly Lion, have been turned to stone. Upon her arrival, she finds a message saying "Beware the Wheelers". She and Billina are soon chased by them (people who have wheels instead of hands and feet) into a secret room within the city, where they are told that chickens are illegal. There, Dorothy meets Tik-Tok, the mechanical royal army of Oz. He, being mechanical, explains that (seeing how he's not alive) he must be kept wound up tightly, so as to prevent his thoughts, speech, and action from running down. Dorothy, Billina, and Tik-Tok (now their self-appointed servant) escape from the room and are able to fight off the Wheelers, in which one directs them to Mombi, who explains that the Nome King had taken over the Emerald City and captured the Scarecrow. She, who has a collection of many interchangeable heads (the main one bearing a striking resemblance to Nurse Wilson) wants Dorothy's for it. Dorothy, refusing, is locked up with Billina in Mombi's tower. There, they meet Jack Pumpkinhead, a being whose "mother" was created to scare Mombi. Dorothy devises a plan and thanks to Jack, she is able to wind up Tik-Tok (who wound down as she was captured) and retrieve the Powder of Life from Mombi's head collection while she's asleep, but not before waking her up. Meanwhile, Tik-Tok, Jack, and Billina attach a Gump's head to two sofas with palm leaf branches on both sides for wings and a broom on the back for a tail, that they intend to bring to life and make fly. They narrowly escape Mombi and head toward the Nome King's mountain.

However, the Gump is not too well put together and falls apart, sending everyone plummeting down onto the Nome King's mountain. He, after learning of their identities, confronts Dorothy and tells her that the emeralds were rightfully his and the Scarecrow had been turned into an ornament for his collection. As soon as the others join Dorothy again, the Nome King proposes that they play a game with him. If they touch the correct ornament and say the word "Oz" within three guesses, the Scarecrow will appear and they can go free. But he does not tell them that if they fail to guess correctly, they will turn into ornaments as well. One by one, they go into the ornament room, and fail to guess correctly, thus allowing the Nome King to become more and more physically human from his rock-like state. During Tik-Tok's turn, the Nome King tells Dorothy that thanks to her, the ruby slippers are now his and he can use them to send her back home, never to think of Oz again. She refuses and goes in after Tik-Tok, who lured her in by pretending to wind down as a part of his plan to see if she can see what he changed into. His plan fails, however, as he is nowhere to be found after his final guess. Mombi travels to the Nome King's mountain and tries to warn him about Billina, but he, cutting her off, says that he already knows about Dorothy's presence. He reveals that soon, after she fails, there will be no one left who remembers Oz and that he will be completely human. Meanwhile, in the ornament room, Dorothy, after two guesses, is able to find the Scarecrow as a green ornament. They then rescue the others (who were green ones as well) leaving the Nome King to revert to his original form. He stops them and tries to eat them, starting with Jack, but Billina, who is hiding in his head, lays an egg that falls into the Nome King's mouth. It is revealed that eggs are poisonous to nomes and he disintegrates, leaving the ruby slippers for Dorothy to take. As his mountain collapses, she clicks her heels and wishes for all Ozians (including an imprisoned Mombi) to return there safely and the Emerald City and its citizens to be restored.

The ruby slippers' magic works and a celebration is thrown. The Ozians encourage Dorothy to become the Queen of Oz, but she says despite the friendships she has cherished, she has to go back home. The understanding Ozians comfort her in wishing that she can be in two places at once. But as she says this, the ruby slippers reveal a girl in the mirror behind her. She turns out to be the same mysterious one (who presumably drowned), who helped Dorothy escape from the hospital. She reveals that her name is Ozma, the rightful ruler of Oz and Jack's real "mother". She promises Dorothy that should she ever need to return, she is always welcome.

Dorothy returns home and is found by Toto, Aunt Em, and Uncle Henry, who tell her that the hospital burned to the ground after getting struck by lightning (with Dr. Worley in it) and Nurse Wilson was taken to jail. Back home, Dorothy sees Ozma as her own reflection with Billina (who did not return with her) in her bedroom mirror. She tries to notify Aunt Em, but a hush from Ozma tells her to keep Oz a secret. She, smiling, runs outside to play with Toto as the film ends.

Walter Murch began development on the film in 1980, during a brainstorming session with Walt Disney Productions production chief Tom Wilhite. "It was just a fishing expedition on both of our parts," Murch remembered. "But one of the questions he asked was, 'What are you interested in that you think we might also be interested in?,' and I said, 'Another Oz story.'...And Tom sort of straightened up in his chair because it turned out, unbeknownst to me, that Disney owned the rights to all of the Oz stories. And they were particularly interested in doing something with them because the copyright was going to run out in the next five years."

The film is based on the second and third Oz books, The Marvelous Land of Oz (1904) and Ozma of Oz (1907). The element about Tik-Tok being "The Royal Army of Oz" derives from Tik-Tok of Oz (1914), in which he is made the Royal Army of Oogaboo, and also makes frequent cries of "Pick me up!" That book was itself based on a dramatic production, The Tik-Tok Man of Oz (1913).

Murch took a decidedly darker take on Baum's source material than the 1939 film, which he knew starting out would be a gamble. Between the development period and actual shooting, there was a change of leadership at the Walt Disney Studios (with Wilhite being replaced by Richard Berger), and the film's budget increased. Once shooting began, Murch began to fall behind schedule, and there was further pressure from the studio, leading to Murch being fired as director for a short period. George Lucas and other high profile filmmakers including Francis Ford Coppola supported Murch in discussions with the studio, and Murch was reinstated and finished the film.

The film was developed and produced without the involvement of MGM, the studio behind the 1939 one. No approval was necessary, because by 1985, the Oz books it was based on were in the public domain, and the subsequent ones had been optioned to Disney many years earlier. A large fee was paid, however, to use the ruby slippers, which were still the intellectual property of MGM at the time (as they had been created specifically for the 1939 film to replace the silver ones of the original stories).

The film received mixed reviews upon its release. The film-critics aggregator Rotten Tomatoes records 55% positive reviews based on 22 reviews. Those who were familiar with the Oz books praised its faithfulness to the source material of L. Frank Baum. However, many critics described its tone and overall content as slightly too dark and intense for young children. "Children are sure to be startled by the film's bleakness," said The New York Times' Janet Maslin. Canadian film critic Jay Scott felt the protagonists were too creepy and weird for viewers to relate or sympathize with: "Dorothy's friends are as strange as her enemies, which is faithful to the original Oz books, but turns out not to be a virtue on film, where their eeriness has a tendency to remain eerie no matter how often we're told it's not." "It's bleak, creepy, and occasionally terrifying," added Dave Kehr of the Chicago Reader. It earned $2,844,895 in its opening weekend, finishing in seventh place. It ultimately grossed $11,137,801 in North America.

The film received an Academy Award nomination for Best Visual Effects, but lost to Cocoon. Fairuza Balk and Emma Ridley were nominated for Young Artist Awards. It received two Saturn Award nominations for Best Fantasy Film (lost to Ladyhawke) and Best Younger Actor for Fairuza Balk (who lost to Barret Oliver for D.A.R.Y.L.).

The film's interpretation of Oz is featured in the Storybook Land Canal Boats at Disneyland Paris. Amelie Gillette of the A.V. Club frequently refers to its dark nature as unsuitable for its intended audience of young children despite it being one of her favorite ones growing up. 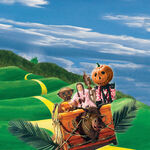