During a banquet hosted by the toads, Anne is reunited with a friend from home.

Three months ago, Anne attends school on her birthday with her best friend, Sasha, who defends her from bullies and fakes being hemaphobic so that they can get out of school and have fun. When Anne attempts to head home to celebrate her birthday, Sasha convinces her to stay with her and meet with Marcy to check out a music box they've seen at a thrift store. Present day, the toads invade Wartwood, claiming that they are throwing a banquet for all of them. Anne introduces the Plantars to Sasha who is visibly annoyed by them, but allows Anne to have them ride with them back to Toad Tower. When they make it back, the Plantars allow Anne to catch up with Sasha whom she learns has been living a life of luxury in her own room complete with perfect recreations of earth food.

In the banquet hall, Sprig begins noticing that the toad guards are "on edge" and after confronting one, deduces that they are prisoners and incites a riot. Sasha tells Anne that the toads plan to quell a rebellion that has recently begun surfacing. The source being from Hop Pop, since he tried running against Mayor Toadstool, and that they will feed him to a giant plant monster outside. Anne makes her way to the banquet hall, posing as Sasha, and gets all the toad guards to leave. She reunites with the Plantars and informs the rest of Wartwood the toads plans for them. She locates a sewer drain in the room and leads all the citizens out through it while One-Eyed Wally leaves behind boom shrooms, despite Anne telling him not to use them.

They all end up getting caught and brought to the high point of the tower. When the toads try grabbing Hop Pop and harm Sprig and Polly, Anne comes to their defense by stealing a sword. Sasha begins talking down to Anne by once again manipulating her and getting her to put her weapon down, but Sprig gets through to her by hitting Sasha with a mud ball and calling her a bully. Anne, realizing that Sasha has been doing nothing but controlling her, finally fights back. Grime is impressed and has the two fight in combat. If Anne wins they can all go home, but if Sasha wins they will all be fed to the plant monster.

Anne and Sasha fight with the former being the victor. However, Grime still plans to throw Hop Pop off the roof, only to be interrupted by the boom shrooms left by Wally. As everyone evacuates, Anne attempts to rescue Sasha from falling, but she lets herself go admitting that she is better off without her. As she falls, Grime rescues her. Everyone manages to successfully flee as the toads carry Sasha away and Anne cries with the Plantars comforting her. As everyone returns to Wartwood, the Plantars promise Anne that they will get her home and she embraces them as her family with a title card reading "End of Part 1". 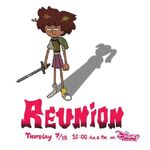