Finn Darby
Theo Darby
Rhys Montague Darby is a New Zealand actor, voice actor, and comedian. He is known for playing Murray Hewitt in Flight of the Conchords. He also had supporting roles in films, such as What We Do in the Shadows, The Boat That Rocked, and Jumanji: Welcome to the Jungle.

For Disney, he voiced Percy in the Jake and the Never Land Pirates episodes "Jake's Cool New Matey" and "F-F-Frozen Never Land!". He also voiced Mwenzi in The Lion Guard and King Pistashion in Milo Murphy's Law. He even played Eddie in Star vs. the Forces of Evil and Dr. Biscuits in the ABC TV show, Single Parents. He currently voices a Life Guard in an episode of Big City Greens.

Eddie
(Star vs. the Forces of Evil) 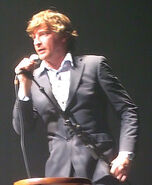 Darby performing with Flight of the Conchords in June 2007.
Add a photo to this gallery
Retrieved from "https://disney.fandom.com/wiki/Rhys_Darby?oldid=4077720"
Community content is available under CC-BY-SA unless otherwise noted.