Gets arrested by Dick Tracy
Ribs Mocco is a character in Disney/Touchstone's 1990 live-action film Dick Tracy. He was played by actor Robert Beecher. Ribs was a member of the criminal underworld and was present at the meeting held by Big Boy. He was seated next to Influence. Big Boy referred to a past incident in which Ribs had tried to kill him, but Big Boy claimed that it was time to put such incidents behind them.Ribs was present during Tracy's "raid" on the Club Ritz, seated at Big Boy's table next to Numbers.

Ribs was later seen being arrested by Tracy while attempting to extort or possibly rob a shop-keeper. 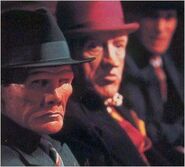 Add a photo to this gallery
Retrieved from "https://disney.fandom.com/wiki/Ribs_Mocco?oldid=4047271"
Community content is available under CC-BY-SA unless otherwise noted.