1986-present
Richard "Rich" Moore is an American animation director and a business partner in Rough Draft Studios who is best known for his work on The Simpsons and Futurama.

For Disney, he directed the theatrical feature, Wreck-It Ralph for the Walt Disney Animation Studios, released on November 2, 2012. Moore also provided the voices of Sour Bill and Zangief from Street Fighter in the film.

On March 4, 2015, it was announced that Moore returned to co-direct Zootopia, along with Byron Howard and Jared Bush. He also co-directed Ralph Breaks the Internet, the sequel to Wreck-It Ralph, in 2018. 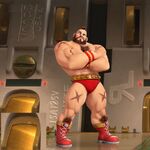 Rich Moore at premiere of Wreck it Ralph in October 2012.

Rich Moore and Byron Howard behind the scenes of Zootopia.

Rich Moore with Byron Howard and Clark Spencer pose in the press room during the 89th annual Academy Awards in February 2017.