Jake Elliot, Cole, and Wyatt
Richard Steven Horvitz is an American actor and voice actor. He is perhaps best known for his voice roles as Alpha 5 in Mighty Morphin Power Rangers, Dagget Beaver in The Angry Beavers, Billy in The Grim Adventures of Billy and Mandy, and the titular character in Invader Zim.

For Disney, he voiced Ned Frischman in Dave the Barbarian, Aviarius in Kim Possible, a ninja in Fish Hooks, Mouth in Kick Buttowski: Suburban Daredevil, Yucky in Billy Dilley's Super-Duper Subterranean Summer, Scooper in Ted Brooks' crazy dream in Snow Dogs (uncredited), and additional voices in both the 1998 animated film Mulan and Howl's Moving Castle. Additionally, he played Teddy in the That's So Raven episode "Adventures in Boss Sitting", and voiced Shiriki Utundu in the Tokyo DisneySea version of the Tower of Terror. He also voiced Ocho the octopus in Elena of Avalor. 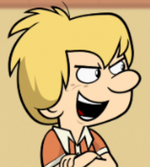 Ocho
(Elena of Avalor)
Add a photo to this gallery 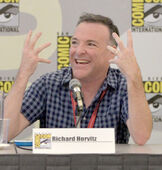 Richard Horvitz speaks at the 2014 San Diego Comic Con.
Add a photo to this gallery
Retrieved from "https://disney.fandom.com/wiki/Richard_Horvitz?oldid=3912937"
Community content is available under CC-BY-SA unless otherwise noted.