Richard Bruce Kind is an American actor, voice actor, and comedian who is best known for his television roles as Dr. Mark Devanow in the NBC sitcom Mad About You from 1992 to 1999, and Paul Lassiter in the ABC sitcom Spin City from 1996 to 2002. He is also well-known for voicing Tom Cat in Tom and Jerry: The Movie, the Dad Rat in Garfield: The Movie, a Groundhog in Dr. Dolittle: Tail to the Chief, and Roger the Alligator in the Nickelodeon/DreamWorks' The Penguins of Madagascar, as well as the video game Dr. Blowhole Returns – Again!.

Kind has had multiple Disney roles. He voiced Molt in the 1998 Disney/Pixar film, A Bug's Life, Van in the 2006 Disney/Pixar film, Cars, Larry in the 2006 Disney animated film, The Wild, and Bookworm in the 2010 Disney/Pixar film, Toy Story 3. He also voiced Eddy in the Disney live-action films: Santa Buddies, The Search for Santa Paws, and Santa Paws 2: The Santa Pups. Additionally, he voiced the Totally Tools Executive in the Phineas and Ferb episode "Perry the Actorpus", and Frugal Lucre in the Kim Possible episode "Low Budget". Kind later voiced Mort Weinerman in the second season of the Disney XD animated series Randy Cunningham: 9th Grade Ninja. He also played Uncle Chuck in Even Stevens and voiced Bing Bong in the 2015 Disney/Pixar film, Inside Out. In addition, he voiced Uncle Monty in Tangled: The Series, Durpin in LEGO Star Wars: The Freemaker Adventures, Uncle Manny in the Mickey Mouse Mixed-Up Adventures episode "Donald's Dilemma", Cheezel in Mickey Mouse Funhouse, Jules in the Bob's Burgers episode, "Flat-Top o' the Morning to Ya", and The Director in the The Simpsons episode, "A Springfield Summer Christmas for Christmas". He was going to voice a vulture in Home on the Range, but the role was cut from the film. 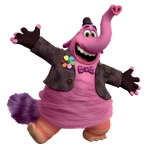 Bing Bong
(Inside Out)

Richard Kind behind the scenes of A Bug's Life.

Richard Kind at the grand opening of Cars Land at the Disneyland Resort in June 2012.

Richard Kind poses for a photo at the 2014 Sundance Film Fest.

Richard Kind behind the scenes of Inside Out.

Richard Kind speaks at the Red Oaks panel at the 2016 Summer TCA Tour.