1979-present
Richard Francis McGonagle is an American actor and voice actor, who is best known for voicing Colonel Taggart in Prototype, Orlovsky in World in Conflict: Soviet Assault, Victor Sullivan in the Uncharted franchise, Four Arms and Exo-Skull in the Ben 10 franchise, Bato in Avatar: The Last Airbender, Dr. Peace in No More Heroes, Eight Armed-Willy in The Marvelous Misadventures of Flapjack, Dr. I.Q. Hi in Duck Dodgers, Apocalypse in X-Men Legends II: Rise of Apocalypse, Ed Machine in Scooby-Doo! Mystery Incorporated, Tom Sheldon in Just Cause, Abin Sur in Green Lantern: First Flight, and Bill the Wrangler in Spirit: Stallion of the Cimarron.

For Disney, he voiced Mr. Incredible in the video games The Incredibles and The Incredibles: Rise of the Underminer and as the voice of the Narrator and the Old Mouse in the 2013 version of Castle of Illusion starring Mickey Mouse. He also provided some additional Mr. Incredible voice work in the Disney INFINITY series alongside with Craig T. Nelson. He even voiced Mayor Turkey Lurkey in Chicken Little: The Video Game; replacing Don Knotts in the process as he did not reprise his role. 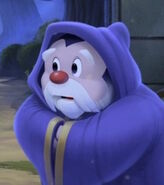 Mayor Turkey Lurkey
(Chicken Little: The Video Game)
Add a photo to this gallery
Retrieved from "https://disney.fandom.com/wiki/Richard_McGonagle?oldid=3797043"
Community content is available under CC-BY-SA unless otherwise noted.