Complications from a stroke

Richard Milhous Nixon was the 37th President of the United States, serving from 1969 to 1974. He previously served as the 36th vice president from 1953 to 1961, having risen to national prominence as a representative and senator from California. He became the only president to resign from the office, following the Watergate scandal. 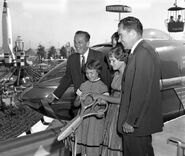 Key to Disneyland given to Nixon

Rocket to the Moon Lunar Flight Certificate given to Nixon on August 11, 1955
Add a photo to this gallery

Retrieved from "https://disney.fandom.com/wiki/Richard_Nixon?oldid=4489205"
Community content is available under CC-BY-SA unless otherwise noted.