Lynda (with Joan), Gregory, and Victoria (with Elizabeth)
Richard Morton Sherman is an American songwriter who specialized in writing for musical films with his brother Robert B. Sherman, known as the Sherman Brothers.

Some of the Sherman Brothers' best-known writing includes the songs from Mary Poppins, The Jungle Book, the Winnie the Pooh franchise, Chitty Chitty Bang Bang, and the Disney theme park songs "It's a Small World" and "There's a Great Big Beautiful Tomorrow".

Richard Morton Sherman was born in New York City to Russian-Jewish immigrants, Rosa and Al Sherman. Together with his older brother Robert, The Sherman Brothers eventually followed in their songwriting father's footsteps to form a long-lasting songwriting partnership.

Following seven years of frequent cross-country moves, the Sherman family finally settled down in Beverly Hills, California in 1937. Throughout Richard's years at Beverly Hills High School he became fascinated with music and studied several instruments including the flute, piccolo, and piano.

At Bard College, Sherman majored in Music, writing numerous sonatas and "art songs." His ambition to write the "Great American Symphony" eventually led him to write songs. Within two years of graduating, Richard and Robert Sherman began writing songs together on a challenge from their father, songwriter Al Sherman.

In 2000, the Sherman Brothers wrote songs for Disney's blockbuster film The Tigger Movie (2000). This film marked the brothers' first major motion picture for the Walt Disney Company in over 28 years.

During a London press junket promoting the 40th anniversary DVD re-release of The Jungle Book, Robert and Richard Sherman were witnessed by press working on a new song for Inkas in the same Brown's Hotel room, where The Jungle Book was originally penned by British writer, Rudyard Kipling, over a hundred years earlier.

In May 2009, a documentary called The Boys: The Sherman Brothers' Story was released. In October 2009, Disney released a 59 track, two CD compendium of their work for the studio spanning forty-two years. The CD is entitled: "The Sherman Brothers Songbook".

On March 11, 2010, the Sherman Brothers were presented with a Window on Main Street Disneyland in Anaheim, California in honor of their contribution to Disney theme parks. On May 17, 2010 the "Career Achievement Award" at The Theatre Museum's 2010 Awards Gala.

On January 10, 2014, in a surprise unveiling, the backstage dressing room at the El Capitan theater in Hollywood, CA was formally dedicated the Sherman Brothers Dressing Room. Also in 2014, he and his brother's songs and life stories were tributed in a stage musical called A Spoonful of Sherman. In 2015 an original cast recording of the show was released. The show was revived several times over the next few years and it toured the UK and Ireland in 2018.

Sherman contributed new lyrics for the 2016 live-action adaptation of The Jungle Book.

In 2018, Sherman marked his 90th birthday with a star-studded retrospective celebration of the Sherman Brothers songbook at the Academy of Motion Pictures, Arts and Sciences in Beverly Hills, CA. [2]

Sherman contributed three new songs for the live-action Winnie The Pooh film: Christopher Robin, and performs "Busy Doing Nothing" in an end-credits scene. On July 30, 2018, Soundstage A at the Walt Disney Studios in Burbank, CA, where many of the Sherman Brothers songs were recorded, was officially renamed the Sherman Brothers Stage. [3] 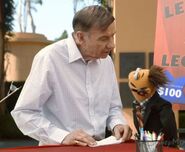 Richard M. Sherman with Walter in Disney Drive-On with The Muppets

Retrieved from "https://disney.fandom.com/wiki/Richard_Sherman?oldid=3961584"
Community content is available under CC-BY-SA unless otherwise noted.