Amanda White
Richard White is an American actor, voice actor, and opera singer who played the character of Gaylord Ravenal in Show Boat at Paper Mill Playhouse and Robert Mission in The New Moon, at the New York City Opera. White also created the title role of Erik in the world premiere of Arthur Kopit and Maury Yeston's musical, Phantom and sings the role on the original cast recording. White is a 1971 graduate of Bethel Park High School.

For Disney, he is most famous for voicing the character of Gaston from the Beauty and the Beast franchise. In a 1991 interview with Newsweek promoting the film, White said that he based Gaston on overconfident jocks he had seen during his teenage years and believed that "had Gaston made it to 30, he would have been twice-divorced with possible hypertension problems".

He was also considered for the role of Governor Ratcliffe in Pocahontas, but the producers realized that viewers would hear his voice and think of Gaston. David Ogden Stiers (who, coincidentally, was one of White's co-stars from Beauty and the Beast) was cast as the voice of Ratcliffe instead.

He is divorced from choreographer Sharon Halley with whom he had a daughter, Amanda.

Gaston
Beauty and the Beast
Add a photo to this gallery 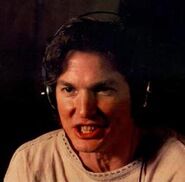 Richard White behind the scenes of Beauty and the Beast.
Add a photo to this gallery

Retrieved from "https://disney.fandom.com/wiki/Richard_White?oldid=3767999"
Community content is available under CC-BY-SA unless otherwise noted.