Disney Wiki
Register
Don't have an account?
Sign In
Advertisement
in: Characters, The Incredibles characters, Pixar characters,
and 9 more
English

Supers, providing for the Parrs

Rick Dicker is a supporting character in the 2004 Disney/Pixar animated film, The Incredibles and its 2018 sequel. He is a government agent of the NSA (National Supers Agency), which was meant to clean up any Super accidents.

Due to Bob Parr's constant need to help others like in the old days, resulting in trouble, Rick had to pay people to keep things quiet, erase memories and relocate the Parrs. The constant crises happened so much that it was getting very exhausting and too expensive for the government. When Bob furiously threw his boss through five walls after he listened to the threat of being fired from Insuricare when he tried to rescue a man from getting mugged that happened just outside the building where Bob worked, Rick had no choice but to cut off Bob completely and leave him to fend for himself. But he did offer one last chance for relocation, which Bob turned down.

When Bob and his family defeated the Omnidroid v.10, Rick drove them home, informing them that they've frozen Syndrome's assets and the government would arrest him if he appears anywhere. Bob asks if the Supers can come out of hiding; Rick replies the politicians will decide that, but he still commends them for doing a good job.

In the short movie, Rick interrogates Kari McKeen, who was looking after Jack-Jack. She had a bad time trying to look after him when his powers awoke. She eventually got fed up when Syndrome arrived, claiming to be the replacement babysitter, much to Rick's disbelief. Rick asks her if she told anyone; she did tell her parents but they thought she was joking. She really wanted to forget everything, in which Rick was glad to do, placing a plunger on her head to suck her memory.

After the Parrs were arrested following their battle with The Underminer, Rick bails them out and escorts them to the motel they were staying at after the destruction of their house. Upon arriving, Bob informs him that a boy named Tony Rydinger had discovered Violet's true identity. To make matters worse, Rick informs them that the "Super Relocation" program is being shut down due to the incident, meaning the Parrs could only stay at the model for two more weeks, after which they would be forced to fend for themselves. Despite this, Bob and Helen assured him they would be fine and thanked him for everything he did for them. In a rare display of honesty, Rick then told them it was an honor to work with them and wished them good luck.

Rick eventually tracked down Tony and had him brought in for interrogation. After he confessed to everything he knew, Rick had his memory wiped. This ended up being his last act as a government agent, however, as the "Super Relocation" program's shutdown also meant that he was let go and forced into retirement.

Later, while cleaning out his desk, Rick got a call from Bob to inquire about the erasing of Tony's memories prior to the point where he asked Violet out on a date. An embarrassed Rick admitted that memory erasing was not an exact science, though he did peruse through Tony's dossier and relayed that the boy worked part-time at his parent's restaurant, "The Happy Platter". Later in the ending, when Supers are now legal once more, Rick is seen in the far right side, glad for his friends. 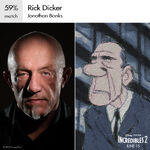 Rick Dicker in LEGO The Incredibles