Jane Fallon (1982-present)
Ricky Dene Gervais is an English comedian, actor, voice actor, director, producer, musician, writer, and former radio presenter. He is well known for hosting his self-titled talk show, The Ricky Gervais show. He also appeared in films, such as Dr. McPhee in the Night at the Museum trilogy and Pincus in the 2008 comedy Ghostown. Additionally, he served as a writer for several TV shows, such as The Office.

For Disney, he voiced Bugsy in the 2005 animated film, Valiant. He also made a cameo in the 2011 Disney film, The Muppets (which his cameo was cut from the final film), and starred in its sequel as Dominic, aka Number Two. In addition, he played Daniel Ryan in the ABC TV show, Alias and Xanax in the ABC TV show, Galavant. 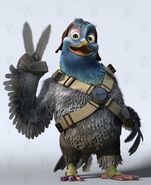 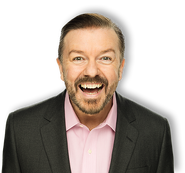 Ricky Gervais behind the scenes of Valiant.

Ricky Gervais speaks at the Derek panel at the 2013 Winter TCA Tour.

Ricky Gervais at premiere of Muppets Most Wanted in March 2014.

Ricky Gervais visiting The Late Show with Stephen Colbert in May 2017.