4
Richard Bartlett "Ricky" Schroder Jr. is an American actor, screenwriter, director, and producer. He made his debut in the 70's sitcom Silver Spoons. As an adult, he gained more recognition for his role as Danny Sorenson in the TV drama series NYPD Blue.

For Disney, he starred as Lieutenant Paul Hellerman in the 1995 Hollywood Pictures film, Crimson Tide and Bobby in The Last Flight of Noah's Ark. He also guest starred as Paul Flowers on the ABC comedy sitcom Scrubs. 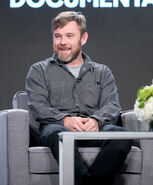 Ricky Schroder speaks onstage at the AUDIENCE Documentaries panel at the 2017 Winter TCA Tour.
Add a photo to this gallery

Retrieved from "https://disney.fandom.com/wiki/Ricky_Schroder?oldid=3735300"
Community content is available under CC-BY-SA unless otherwise noted.