Rico Rodriguez is an American child actor, who is best known for his role as Manny Delgado on the ABC sitcom Modern Family from 2009 to 2020.

Some of his Disney-related roles include Rico in Cory in the House, Leo in Good Luck Charlie, Benny in Austin & Ally, and a cameo appearance in the 2011 Disney film, The Muppets. He also provided the voice of Snow-Foot in the Disney Junior series, Jake and the Never Land Pirates. He even voiced Raha in The Lion Guard.

He is also the younger brother of Raini Rodriguez. 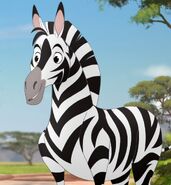 Raha
(The Lion Guard)
Add a photo to this gallery

Rodriguez at the World of Color premiere at Disney California Adventure in June 2010.