2001–present
Erika Joan "Riki" Lindhome is an American actress, voice actress, comedian, and musician. She is well known for appearing in TV shows, such as Garfunkel and Oates and Gilmore Girls.

For Disney, she appeared in The Muppets as Becky, Fozzie's human girlfriend, beginning in the pilot episode. Margo Harshman had played the role of Becky in the network presentation pilot for the show.

She also played Vanessa Holden in the episode "52 Pickup" of the CBS/ABC Studios TV show Criminal Minds and voices Wendy Wower in Big Hero 6: The Series. She voices Kimberly Harris on Duncanville and Gina in Big City Greens.

Gina
(Big City Greens)
Add a photo to this gallery 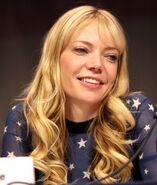 Riki Lindhome speaks at the 2013 WonderCon.
Add a photo to this gallery
Retrieved from "https://disney.fandom.com/wiki/Riki_Lindhome?oldid=4271937"
Community content is available under CC-BY-SA unless otherwise noted.