Leader of the street dogs

To avoid all human encounters

Ashcan and Pete, Jack and Ralph, humans in general

Playing it safe, protecting his gang

"Yo, housepet! I'll keep in mind about what you said...about humans."
Riley is a stray mutt in Homeward Bound II: Lost in San Francisco, and the leader of a gang of stray dogs.

Riley is the leader of a gang of street dogs whose names are Delilah, Bando, Sledge, Stokey, and Spike. He is first seen arriving with his gang and saves Shadow, Sassy, and Chance from Ashcan and Pete, two vicious junkyard dogs. He then tells Shadow and Sassy (Chance fled, thinking that Riley's gang were reinforcements for Ashcan and Pete by Sassy) that it is unsafe to be around here because there are humans present, and humans are bad news.

Riley reveals that he hates all humans, as well as pets who associate with humans. The reason why (according to what Delilah told Chance at some point) is that a long time ago, when Riley was just a puppy, he was a Christmas present for a boy. However, the boy refused to like him and play with him, so the parents got rid of him by leaving him in a gutter on that Christmas night in the rain.

Riley later starts to change his mind about humans after Shadow rescues a boy named Tucker from a burning house. When he asks Shadow if a human would risk their lives to save him, he tells Riley that his owner Peter would. He then agrees to escort Shadow and Sassy home. However, Riley is displeased when he sees Chance hanging with Delilah (they had sparked a romance together while he and his gang had left). Indignant, he tries to convince Delilah that she shouldn't be with Chance because he is a housepet. She refuses to listen to Riley at first, but when Chance's unruly antics get him and Riley's gang in trouble, Delilah reluctantly dumps him, causing poor Chance to storm off heartbroken for what everyone caused.

Riley and his gang attempt to find Chance, but to no avail. Riley is last seen leading Shadow and Sassy to the bridge, where he and the two housepets prepare to go their separate ways. Before they do, Riley tells Shadow that he'll keep in mind about what the latter said about humans, to which Shadow replies, "Riley, you're all right." Presumably, he also allowed Delilah to quit his gang to be with Chance. 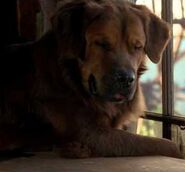 Riley (left) with Shadow (right) in Homeward Bound II: Lost in San Francisco
Add a photo to this gallery

Retrieved from "https://disney.fandom.com/wiki/Riley_(Homeward_Bound_II)?oldid=4060068"
Community content is available under CC-BY-SA unless otherwise noted.