Disney Wiki
Register
Don't have an account?
Sign In
Advertisement
in: Characters, Females, The Replacements characters,
and 16 more

Fame, popularity, telling everyone, playing baseball, playing country fiddle/country rock on the violin, ponies, candy, Honey Hive Scouts, any forms of sugar, horses, Thunderbolt, the library, Dustin Dreamlake, Susie May, cinema, not being scary, Prince Cinnamon Boots, her brother Todd, going on a date with Johnny, hanging out with Tasumi and Abbey

Her rival, Sierra, bad luck, Todd's antics, Prince Cinnamon Boots' bad behavior, Buzz, being apart from Johnny, being scary, Todd using the phone, Todd replacing the librarian with a rock star, Johnny break up with her, being made fun of

Riley normally uses the Fleemco phone to replace mean or unfair adults. She enjoys playing baseball, playing the violin, ponies, Hornet Hive Scouts, candy, and pretty much any form of sugar. At one point she was part of the Journalism staff at school.

She has a crush on Johnny Hitswell and they became a couple in season 2. However in "Heartbreak in the City", Johnny broke up with her because of her controlling attitude.

She has an imaginary unicorn friend named Rainbow Jumper. She gets a B average in school. She prefers playing country fiddle/country rock on the violin. She is a fan of Susie May, Dustin Dreamlake, and J.J. Baker. Riley loves reading books and the library. Riley had braces when she was younger. Riley also has a mission: Get Todd to do the right thing and be selfless. Sugar makes Riley hyper.

In "The Spy That Wasn't Riley", Riley tries one of her dream careers as a spy instead of a window washer that the Career Day test and the former guidance counselor Mr. Leslie told her to be, and almost blows up Antarctica when she stows away on K's mission to stop Dr. Scorpius, but in the end, Riley saves the day even though K's mission is too dangerous. In "She Works Hard for the Movie" we learn that Riley has an Aunt Debbie and her middle name is Eugene. In "Ratted Out", she began to sing the very first song of the entire series entitled "My Rat Buddy".

In Davey Hunkerhoff, Riley replaces an elderly lifeguard with a younger, new handsome guy named Davey Hunkerhoff and pretended to be in love with him in order to make her crush Johnny Hitswell jealous. However, Davey had fallen in love with Riley and was saddened when he explained that she was just using him to make Johnny jealous and quit his job as the lifeguard. After some forcing from Todd, Riley finds Davey and apologies for what happened and in bring back doing things for him to think up for it (e.g. peddling a bike to power a fan).

In the first season, Riley only wears a yellow shirt, blue jeans with a multicolored belt around it, green sandals, and wearing a green hairclip on the left side of her hair.

In season 2, while she still wears the same outfit, this time, the color of her hairclip and sandals are now purple instead of green. Also, she wore a new outfit in the series; a blue hoodie, purple sweatpants, and blue shoes. 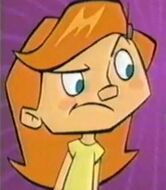 Riley with her fancy makeover

Riley in her beach wear

Riley with her friends Tasumi and Abbey

Riley dressed as her mom for Halloween

Riley with Jacobo and Tasumi

Riley with her brother Todd

Riley as a spoiled princess

Riley in her concert dress 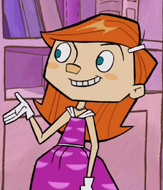 Riley in a dress

Riley in her princess dress

Todd and Riley's wacky double take, as seen in "iTodd".

Riley co-running the replacement program with her brother, Todd

Riley and her friends are cheerleaders