“I fight for the users!”
―Rinzler

Rinzler is a supporting antagonist in Tron: Legacy. He is a villainous version of Tron, who was reprogrammed by CLU to be his primary enforcer.

Rinzler's identity came into being when Tron was supposedly "killed" by CLU.

After his reprogramming, Rinzler is obedient to CLU, always carrying out his orders. He is reserved, never speaking unless necessary.

Rinzler wears black body armor with orange circuitry, with four orange squares arranged in the shape of a "T" on his chest and lines on his fore and middle fingers. His face is covered by a black helmet. Like Tron, he wields an Identity Disc, though this one is a black chakram-like weapon with a white outer border and an orange inner border that can split into two discs.

Following the defeat of Sark and the Master Control Program, Kevin Flynn copies Tron from the ENCOM server onto his new Grid and also creates CLU 2 so that the two of them will oversee the Grid's maintenance.

One day, however, while Tron is escorting Kevin Flynn to the portal to the real world, they are ambushed by CLU 2 and four Black Guards. Tron tells Kevin to run as he fends them off, leaving him to fight and ultimately lose to CLU 2. Tron is then repurposed to serve him as Rinzler.

Rinzler appeared as the final opponent of the Disc Wars, where he identified Sam as a user after seeing him bleed, and brought him before Clu. He was later summoned when Quorra interrupted the light cycle duel but was unable to prevent her from rescuing Sam. Despite the setback, he continued to assist Clu, acting as a personal enforcer. On CLU's Carrier Ship, Kevin, Sam, and Quorra noticed Rinzler patrolling the area, and Kevin immediately recognized him as Tron, the former System Monitor program of the Tron system.

Quorra allowed herself to be captured by Rinzler in order to lead him away from Kevin and Sam. Rinzler took her to CLU for interrogation, before being charged with escorting her back to CLU's Command Ship. Once there, Rinzler interrupted Sam who had been in the process of liberating his father's identity disc. He pushed Quorra away to engage Sam in a disc fight, but this battle was cut short when he evaded two thrown discs only to be kicked off a nearby ledge by Quorra, lying forgotten at his feet. Rinzler was left dangling only briefly and promptly vaulted back into the ship as Sam and Quorra made their escape. CLU then arrived with four Black Guards in tow, and together with Rinzler set out in pursuit of the fugitives, following their captured Light Jet with smaller Light Jets of their own. In the ensuing fight, Rinzler and Kevin Flynn made eye contact.

From that point on, Rinzler began to experience flashbacks of when he had once saved Kevin and was able to overcome Clu's reprogramming, eventually overriding it all together. Once freed of Clu's control, he deliberately crashed his Light Jet into Clu's, derezzing both crafts and allowing the three heroes a chance to escape. Clu and Rinzler scuffled briefly as they fell, but Clu grappled Rinzler's spare baton away, created a new Light Jet for himself, and left Rinzler to plummet into the Sea of Simulation below. Rinzler's circuitry flickered and died after he plunged into the sea. Then it relit in Tron's white glow as he sank out of view. 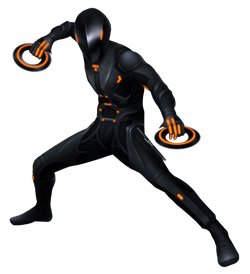 Rinzler appears in Kingdom Hearts: Dream Drop Distance in The Grid, a sleeping world of the world Space Paranoids. Despite being a different Tron than the one Sora knew from Space Paranoids, Sora still recognizes him and seeks to return him to his true state.

Rinzler is first seen preparing to fight Sora, however, upon seeing Sora's Keyblade, Rinzler soon leaves without attacking. He returns to CLU, showing him Sora through his disc, giving CLU an idea. When Sora and Quorra enter CLU's Throneship, they are suddenly ambushed by Rinzler. Sora attempts to get Rinzler to remember his past as Tron but fails as Rinzler sends his discs towards Sora, but Quorra manages to block the attack for him. Quorra proceeds to engage Rinzler but is defeated and seemingly captured. However, it turns out that Sora indeed managed to get through to Rinzler to an extent, causing him to hesitate long enough for Quorra to escape.

After Sora's encounter with young Xehanort, he finds himself in a Disc Wars stadium (as contestant number 13), where he encounters CLU and Rinzler. CLU later offers Sora to release Rinzler in exchange for the Keyblade, which Sora refuses. CLU then makes Rinzler fight Sora who then fights back per Quorra's advice, since Tron is able to hear him. Sora defeats Rinzler, and reprograms him, freeing Rinzler and allowing him to remember his past, like Tron. CLU angered by it and attempts to take out Sora with his disc. Rinzler manages to protect Sora by pushing him aside and take the hits, before the floor beneath him derezzes, causing Rinzler to fall down, despite Sora's attempts to save him. CLU then leaves to recapture Rinzler, saying he'll deal with Sora later.

Later on, Sam, Kevin, Quorra, and Riku find themselves at the Solar Sailer dock and noticed Rinzler patrolling the area with Quorra allowing herself to be captured by him and taking her to the Rectifier. Sam and Riku knowing that they can't leave her behind insist that they should rescue Quorra and steal back Flynn's disc. After they managed to steal back Flynn's disc, they are interrupted by Rinzler who pushes Quorra aside and prepares to fight them, but Riku performs a Flowmotion leap and knocks him off in a nearby ledge, leaving his fate unknown.

Rinzler appeared as a DLC costume in the[1] [2]Tron Costume Pack for Fall Guys: Ultimate Knockout, featured alongside Quorra and the series’ titular character able to be purchased from Steam or the PlayStation Store for US$4.99

The Disney Wiki has a collection of images and media related to Rinzler.