Danae (with Wedgeworth)
Tony, Jon, and Angelica (all with Page)
Katie and Claire (both with Wright)
Elmore Rual "Rip" Torn, Jr. was an American film and television actor. He was known for several roles, such as Artie in The Larry Sanders Show, Zed, the head of MIB in the 1997 film, Men in Black and its 2002 sequel, Men in Black II, and Patches O'Houlihan in the 2004 comedy Dodgeball: A True Underdog Story.

For Disney, he voiced Zeus in Hercules. He also played Harvey Potter in Balloon Farm, Randall Tyson in Senseless, and John Scanlon in The Insider.

He was the husband and widower of Geraldine Page, who voiced Madame Medusa in The Rescuers and Mrs. Duke in The Happiest Millionaire. 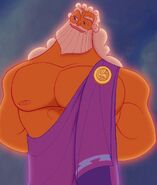 Zeus
(Hercules)
Add a photo to this gallery

Rip Torn behind the scenes of Hercules.
Add a photo to this gallery
Retrieved from "https://disney.fandom.com/wiki/Rip_Torn?oldid=4507475"
Community content is available under CC-BY-SA unless otherwise noted.