The Jungle Book: Alive with Magic

Rivers of Light is a nighttime show at Disney's Animal Kingdom at the Walt Disney World Resort. It is located in the park's Discovery River lagoon between Discovery Island and Expedition Everest.[2] The show features water, mist screens, floating lanterns, lights, fog, projection mapping and live performers.[3] and incorporate the park's Tree of Life into the show.

The show is only be able to seat 5,000 guests, giving it the smallest capacity of Walt Disney World's night-time shows.[13]

A portion of the show was previewed to media on April 19, 2016, when it was also announced that The Jungle Book: Alive with Magic, a limited-engagement show based on the 2016 live-action film, would fill the space of the delayed Rivers of Light night-time show until it was ready.[14][15]

Rivers of Light finally soft opened on February 10, 2017, with the official opening taking place a week later on February 17. The show's live cast was removed after September 29, 2018 as a result of budget cuts throughout Walt Disney World. The Shaman characters would later make an appearance on December 31, 2019 in front of the Tree of Life for a special New Year's edition of Tree of Life Awakens.

On April 22, 2019, it was announced that the show would be given an update incorporating familiar animated characters and music alongside the Disneynature footage, with the new show being titled Rivers of Light: We Are One. The new version of the show is set to debut on May 24. it featured footage from The Lion King, Tarzan, Bambi, Finding Nemo and its sequel Finding Dory, Pocahontas, Brother Bear, The Jungle Book, Moana, The Rescuers Down Under, Disneynature films etc.

On July 16, 2020, The shows does not re-open following the resort's closure for the 2020 COVID-19 pandemic, however, it was permanently closed, along with Primeval Whirl and Stitch's Great Escape!, since the final performance will be close set to March 12, due to the COVID-19 pandemic.

Around 10 minutes prior to the show, a preshow of sorts takes place in the Discovery Island trees on the far side of the lagoon with fireflies glowing and the shadows of animals walking through the trees. Four lotus floats also begin moving into a starting position.

At the start of the show, two lantern sailboats arrive, each carrying a shaman storyteller and their apprentice. On the Asia side is Aditya and Ketu, representing the element of fire. On the Dinoland side are Aseema and Ambu, representing water. These characters never speak a word, and instead communicate through music, dance, shadow puppetry and magic. A narrator then explains the lantern festival pageant we are about to witness.

“Of all the gleaming planets in our vast universe, it is only here on Earth that water and light harmoniously unite to create the wonder of life. We most graciously welcome you to a timeless celebration of water and light with roots as far reaching as time itself. Here, where the forces of nature meet in harmony, the spirits of the animals are free to dance together in the night sky creating Rivers of Light. We are united in this special place to celebrate the magnificence and wonder of all living creatures, for in life we are all one.”
―Narrator

The music builds and four Animal Lantern floats arrive, a Tiger, a Sea Turtle, an Elephant parent and child, and a Great Horned Owl. As they move along the lagoon and the four lotus floats start to unfold and shoot water jets, the Animal Spirits inside the lanterns begin to emerge and take to the sky. This sets the stage for the last float to arrive, the giant Temple Lotus. The five lotus fountains begin to dance with the animal spirits, who are called into action by the shadow puppetry of the shamans.

After the Dance of the Lotuses, a journey through the natural world begins, set to the original song "We Are One". The sequence starts as Aditya plays his horn to call the Tiger, who leaps onto the lagoon and roars, starting a journey through jungle environments. Aseema sends the turtle spirits onto the lagoon to take us through the ocean. The Elephant spirits appear to start off a trip through the African savanna, featuring a Lion and Cheetah chase. Finally, Aseema sends the Horned Owl to travel to North American mountain tundra and polar regions and the song concludes over a montage of animal families.

The music begins to rise again with a score inspired by Transformation and the Rivers of Light, the aurora borealis, begins to take shape as countless animal spirits dash into the skies, concluding with the breach of a humpback whale. The show enters its finale, the music becomes more ethereal and a starscape of animal constellations begins to take shape. The narrator returns for concluding remarks.

“Within each of us is a light. A light that shines in all living things. Here where fire and water bridge the earth and sky, our light rises on the wind to join the stars. As we journey on this great earth, may we remember the light we share. May we celebrate our bond with the natural world and the wonders that flow on Rivers of Light.”
―Narrator

The animal spirits return to their lanterns to become part of the starscape and a tower of torches emerges from the Temple Lotus to dance with the fountains of the four smaller lotuses for a final reprise of "We Are One".

Rivers of Light was initially conceived of as a nighttime parade by Steve Davison through the streets of Animal Kingdom, but this concept was shelved due to the costs of infrastructure alterations necessary for visibility and movement. [16] In the wake of World of Color, the concept was revisited as a show for the Discovery River Lagoon.

Animal footage for the show was pulled from a material shot during the production of the Disneynature documentary films. 11 barges make up the primary setpieces of the show, nine of which are computer-controlled. These include the four Animal Spirit Guide floats, the four lotuses, and the main Temple Lotus. The sailboats hosting the show's live Shaman cast are each driven by a human pilot. Additionally, in its original plans, one-hundred small floating lanterns, fifty for each side of the amphitheater, would also be computer-guided and provide additional color and flair to compliment the main barges. However, technical difficulties that delayed the show related to these additional elements would lead to them being shelved and the show being restaged. Additionally, to shave off running time, the opening was altered from the Shaman teams walking through the amphitheaters in a musical procession to their boats to them simply starting the show already aboard. The "Parade of the Animal Spirits" segment would also be trimmed, bringing the original 18-minute runtime down to 15 minutes.

We Are One Lyrics

Main article: We Are One (Rivers of Light song) 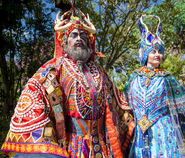 Aditya and Aseema image from the Disney Parks Blog

Costume designs for Aseema and Aditya 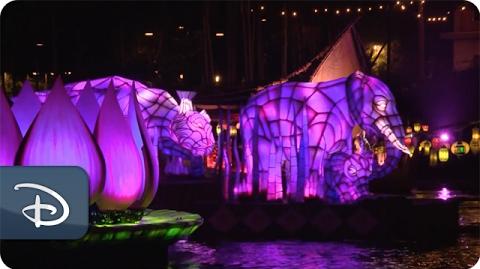 What Guests Are Loving About 'Rivers of Light' Disney's Animal Kingdom