His appliances, cars, having fun with Chris and Robbie

"I just have to put the finishing touches on my thesis, and I'll see you there."

Robert "Rob" McGroarty (referred to by the appliances as the Master) is a major character in all three of The Brave Little Toaster movies.

Rob is the Toaster and the other four appliances' rightful owner, and the primary reason for their search. Thinking he had abandoned them, they decide to find their Master themselves, passing through many dangers along the way. Meanwhile, Rob appears at his apartment in the city ready for Chris to take him to the cabin where he spent his childhood so Rob can pick up Toaster, Blanky, Lampy, Radio, and Kirby to use at his dorm at college.

On their way to the cabin, Rob tells Chris that she's going to like the cottage and that it's a shame that his family has to sell it. When they get to the cabin, Rob and Chris go inside and find the place to be a complete mess (from the appliances' attempts to escape). Rob believes that someone came in and trashed the cottage, to which Chris replies, "You big dumbo! Didn't you lock the doors?" Even though Rob and Chris don't find the appliances, they manage to fix up the cottage for its future owners and leave to return to Rob's apartment. Later on back at Rob's apartment, his mother tells him that he can have some of her stuff to which Chris suggests that Rob should go for it, but Rob turns down his mother's offer.

Finally reaching his new apartment, the appliances discover that Rob replaced them, and are sent to a junkyard. The Master's black-and-white television broadcasts the Toaster's current location to him, and he departs to the location in the nick of time, only to be thrown in the Crusher's conveyor belt by The Giant Magnet. The Toaster then sacrifices himself to save him, and Rob takes the appliances home and fixes the mangled Toaster before taking them to college.

He has a very strong sentimental value attached to the appliances, evidenced by the lengths to which he went to retrieve them. He was a sandwich kid and the appliances were his only friends until his parents made him move and didn't let him take them with him.

Sometime later, Rob and Chris are married, and Chris has given birth to their first son, Robbie McGroarty, dubbed "The Little Master" by Toaster and the other appliances. However, when Robbie is taken to Mars, Ratso is assigned to keep Rob and Chris in the dark until Toaster and the others return with Robbie. Ratso has to keep the Baby Monitor silent so it can't awaken Rob and Chris to Robbie being missing. Toaster and the others return just in time as the Baby Monitor finally manages to get free from Ratso and alert Rob and Chris, but they awaken to find Robbie unharmed. Sometime later, Rob finds what's left of Tinselina in the trash, and manages to restore her to her beautiful state to stand atop their Christmas tree on Christmas morning. When Rob and Chris notice that Robbie is attempting to say his first word, they are confused when he says "Toaster", before he goes to get Toaster and all the appliances. Once they understand, they take a moment to let Robbie celebrate with the appliances.

The Brave Little Toaster to the Rescue

Following the events of the first film, Rob and Chris arrive at college. Rob has two things he's doing there: Caring for some injured or sick animals, among them being Maisie, Sebastian, Alberto, Murgatroid, and Ratso, and working on a thesis. However, when the TLW-728 prototype supercomputer named Wittgenstein tries to contact Rob, the virus infecting him results in Rob's thesis being lost, leaving Rob frustrated due to having not saved it before it was lost and causing him to have a falling out with Chris as he had apparently forgotten their anniversary as well due to his worry about his thesis and early graduation, and caught her using Kirby to clean kitty litter. However, sometime later, Rob is able to make amends with Chris and restore their friendship when he reveals he did remember their anniversary when he passively mentions their first meeting.

Later, after Wittgenstein is restored to full working operation, he is able to recover Rob's thesis and warn Rob of the impending shipment of the animals he's caring for to Tartarus Laboratories for animal research. He manages to wake up Chris, and the two of them manage to catch up to the truck, where Rob discovers his co-worker from the clinic, Mack, being a part of the plan to send the animals to Tartarus Laboratories, leaving him furious with Mack for his betrayal of Rob's trust. Mack is arrested along with the truck driver, Jim Bob, and the animals are returned to the college, where Rob finishes nursing them back to health before they are sent to their new homes. He soon is shown Wittgenstein and sees that it can be taken to the museum, modernized with new technology, and be put on display so he won't be forgotten again. However, it is then that Rob finds Radio, and discovers that he's missing the extremely rare WFC-11-12-55 cathode tube. Without it, Radio won't ever work again. Wittgenstein tries to help as he takes care of printing Rob's thesis for him so he has everything by the time he graduates. However, before he and Chris leave the college, Rob asks Chris for her hand in marriage, and she accepts. Chris also reveals that she put the word out on the Internet and was able to find a replacement WFC-11-12-55 from Nome, Alaska, allowing Rob to restore Radio to a working condition again. Rob also reveals that Ratso will be coming with them to live with them from now on. With everything set, Rob, Chris, their appliances, and Ratso, set off for their new life together. 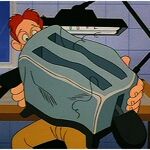 Retrieved from "https://disney.fandom.com/wiki/Rob_McGroarty?oldid=4191882"
Community content is available under CC-BY-SA unless otherwise noted.