For Disney, he played Dick Goodwin in Quiz Show, Abe Leonard in Designated Survivor, and Rick Hayes in Last Dance. He also voiced a Flea Market Salesman in the Phineas and Ferb episode "Tri-State Treasure: Boot of Secrets" and Bernie in the Phineas and Ferb episode "Lost in Danville" and Mr. Brulee in Milo Murphy's Law. He even wrote and directed a few episodes for the Freeform sitcom The Fosters.

Rob Morrow and his wife, Debbon Ayer at the premiere of The Bucket List in December 2007. 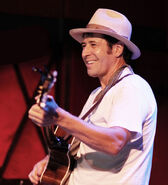 Rob Morrow performing at the Rockwell Music Hall in August 2014.
Add a photo to this gallery
Retrieved from "https://disney.fandom.com/wiki/Rob_Morrow?oldid=3942370"
Community content is available under CC-BY-SA unless otherwise noted.