Laurie, Jeffrey, Andrea, and Robert
Robert Bernard Sherman was an American songwriter, who specialized in musical films with his brother, Richard, known as the Sherman Brothers. Some of the Sherman Brothers' best-known work includes music from Mary Poppins, The Jungle Book, The Many Adventures of Winnie the Pooh, Chitty Chitty Bang Bang, The Slipper and the Rose, and "It's a Small World".

Robert Bernard Sherman was born on December 19, 1925, in New York City. His parents, Russian-Jewish immigrants, Rosa and Al Sherman paid Robert's hospital delivery costs with a royalty check which had arrived that day. The title of the song which covered the hospital bill was "Save Your Sorrow". Al Sherman was to become a well known Tin Pan Alley songwriter.

As a youth, Robert Sherman excelled in intellectual pursuits, taking up the violin and piano, painting, and writing poetry. Following seven years of frequent cross-country moves, the Shermans finally settled down in Beverly Hills, California. Some of the primary schools Robert attended in Manhattan included PS 241 and the Ethical Culture Fieldston School; in California, the El Rodeo School.

Throughout his years at Beverly Hills High School, he wrote and produced radio and stage programs for which he won much acclaim. At age 16, he wrote Armistice and Dedication Day, a stage play centered around contemporary 1940s Americans that showed how their lives were inextricably changed following the December 7, 1941, attack on Pearl Harbor. The play yielded thousands of dollars for War Bonds and earned a special citation from the War Department.

In 1943, Sherman obtained permission from his parents to join the army a year early, at age 17. On April 12, 1945, Sherman was shot in the knee, forcing him to walk with a cane for the rest of his life.

For being wounded during the battle, Sherman was awarded the Purple Heart medal. Other medals awarded to Sherman for service to his country were the Combat Infantryman Badge, two Battle Stars, a European-African-Middle Eastern Campaign Medal, an American Campaign Medal, a World War II Victory Medal, and a Good Conduct Medal.

While recuperating from his knee injury in England, Sherman first became curious about British culture, reading anything he could find on the subject. Once back on his feet, Sherman met and became friends with many British citizens, attaining first-hand knowledge of the United Kingdom, its customs and people.

Years later, Sherman credited this time in his life as the origin of his fascination with England, believing that it proved an invaluable resource to his songwriting career. Many of his best-known works center around English stories, authors and subject matter.

On his return to the United States, Sherman attended Bard College in upstate New York where he majored in English Literature and painting. Sherman also served as the editor-in-chief of the campus newspaper. At Bard, Sherman completed his first two novels, The Best Estate and Music, Candy and Painted Eggs. He graduated, alongside his brother. Richard in the summer of 1949. In 1990, Sherman received an honorary doctorate from Lincoln College. In 2011 both Sherman Brothers received honorary doctorate degrees from their alma mater, Bard College.

In 2000, the Sherman Brothers wrote songs for Disney's blockbuster film The Tigger Movie (2000). This film marked the brothers' first major motion picture for the Disney company in over 28 years.

During a London press junket promoting the 40th anniversary DVD re release of The Jungle Book, Robert and Richard Sherman were witnessed by press working on a new song for Inkas in the same Brown's Hotel room where The Jungle Book was originally penned by the British writer, Rudyard Kipling, over a hundred years earlier.

In May 2009, a documentary called The Boys: The Sherman Brothers' Story was released. In October 2009, Disney released a 59 track, two CD compendium of their work for the studio spanning forty-two years. The CD is entitled "The Sherman Brothers Songbook".

On March 11, 2010 the Sherman Brothers were presented with a Window on Mainstreet Disneyland in Anaheim, California in honor of their contribution to Disney theme parks. On May 17, 2010, both received the "Career Achievement Award" at The Theatre Museum's 2010 Awards Gala.

In 2013, Moose: Chapters From My Life, Sherman's autobiography, was edited by his son Robert J. Sherman and was published by AuthorHouse Publishers. The book was acknowledged in the credits of the film Saving Mr. Banks which also features actors playing the Sherman Brothers. B.J. Novak portrayed Robert Sherman in the film.

On January 10, 2014, in a surprise unveiling, the backstage dressing room at the El Capitan Theater in Hollywood, CA was formally renamed and dedicated to the Sherman Brothers Dressing Room.

Marking the official UK book launch for Moose, Robert J. Sherman wrote and emceed a two-night cabaret called A Spoonful Of Sherman which premiered at the St. James Theatre in London, England on January 6, 2014. The show was billed as "A Celebration of the Life, Times and Musical World of Robert B. Sherman" and was received extremely well by the crowd and the critics alike. The show took on a life of its own, subsequently enjoying a "sold out" return engagement later in the year at the same venue. The Original Cast Recording, double CD was produced by Nicholas Lloyd Webber and released by SimG Records in 2015. In 2017, A Spoonful Of Sherman was revived, playing at the venue, "Live At Zédel" in London. In 2018 the A Spoonful of Sherman UK/Ireland Tour played in 25 cities across the British Isles. 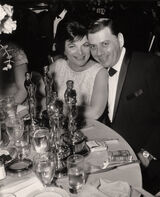