1975–present
Robert Jason Costanzo is an American actor, voice actor, and comedian. One of his most notable roles is the voice of Detective Harvey Bullock in Batman: The Animated Series and its various spin-offs.

For Disney, he provided the voices of Crunchy Potato Chip in the Bonkers episode "Springtime for the Iguana", Philoctetes (Phil) for Hercules: The Animated Series, House of Mouse, and throughout all the current Kingdom Hearts video games and other Disney video games featuring Phil (replacing Danny DeVito). He also appeared on the Disney Channel TV series Hannah Montana in 2007 and 2010 as Al Blaine and Jersey Guy, Lips' Bodyguard in Dick Tracy, Coach Fanelli in Air Bud: Golden Receiver and the ABC TV show, Castle as Sal. He even appeared as a football coach in The Golden Girls season 6 episode "Snap Out Of It".

Philoctetes
(Hercules: The Series, Kingdom Hearts, and other appearances) 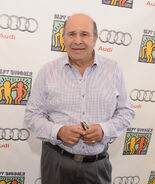 Robert Costanzo attending the Best Buddies Poker Event at Audi Beverly Hills in August 2013.
Add a photo to this gallery
Retrieved from "https://disney.fandom.com/wiki/Robert_Costanzo?oldid=3876443"
Community content is available under CC-BY-SA unless otherwise noted.