Disney Wiki
Register
Don't have an account?
Sign In
Advertisement
in: People, Voice actors, The Lion King,
and 25 more

5
Robert Peter Williams, known professionally as Robert Guillaume, was an American actor, director, producer, singer, voice artist, and comedian, who was best known for his role as Isaac Jaffe in Sports Night and Benson in Soap and its spin-off series Benson. He also voiced Dr. Eli Vance in the video game Half-Life 2 and its episodes.

For Disney, he performed the voice of Rafiki in The Lion King and reprised the role in subsequent projects, as well as hosted The Making of The Lion King. In 1996, Guillaume portrayed Wilkes in First Kid and Agent Steve Bishop in Spy Hard. He also voiced Dr. Vincent Parker in The Proud Family, Ben in The Adventures of Tom Thumb and Thumbelina, and Mr. Thicknose in The Land Before Time VIII: The Big Freeze. He was considered to voice Luke in The Rescuers. 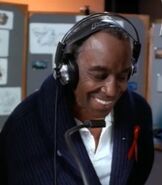 Guillaume behind the scenes of The Lion King
Community content is available under CC-BY-SA unless otherwise noted.
Advertisement