With Van Wagenen:
Scott †
Shauna
David
Amy
Charles Robert Redford, Jr. is an American actor, film director, producer, businessman, environmentalist, philanthropist, and founder of the Sundance Film Festival. He is known for his role as Sundance Kid in Butch Cassidy and the Sundance Kid.

For Disney, he portrayed Alexander Pierce in Captain America: The Winter Soldier and Avengers: Endgame, and was the narrator of the film, Sacred Planet. He also portrayed Warren Justice in Up Close & Personal. In addition, he produced and directed Quiz Show. He portrayed a local storyteller named Mr. Meacham, involving dragons that no one believes in the 2016 live-action remake of Pete's Dragon. He also played Einar Gilkyson in An Unfinished Life, and he produced A Civil Action and People I Know, and he produced and directed The Horse Whisperer, where he played Tom Booker.

He was friends with fellow actor Paul Newman, until Newman's death in 2008. 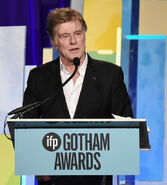