His Disney roles included a platypus director and additional voices in TaleSpin, Captain Jack in the Quack Pack episode "Ready, Aim... Duck!", Al Vermin and Z-Bot in Bonkers, The Great Garbonzo in the Goof Troop episode "Talent to the Max", and Ripcord McQuack in the DuckTales episode "Top Duck".

He also appeared in the Touchstone Pictures film, The Ref. 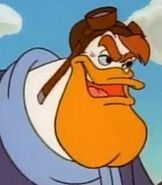 Ripcord McQuack
(DuckTales)
Add a photo to this gallery
Retrieved from "https://disney.fandom.com/wiki/Robert_Ridgely?oldid=3893606"
Community content is available under CC-BY-SA unless otherwise noted.