Disney Wiki
Register
Don't have an account?
Sign In
Advertisement
in: People, 1980s births, People from California,
and 5 more

Zoey Grossman (2017-present)
Robert Coppola Schwartzman is an American actor and singer, well known for being the lead vocalist of the rock/pop band Rooney. He also appeared in films, such as Paul Baldino in the 1999 adaptation of The Virgin Suicides (which was directed by his cousin, Sofia Coppola). He is also the younger brother of actor Jason Schwartzman.

For Disney, he played Michael Moscovitz in the 2001 comedy The Princess Diaries. 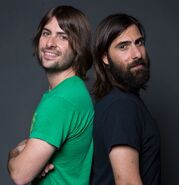 Robert Schwartzman with his brother, Jason posing for photos for Glamour in April 2016.
Community content is available under CC-BY-SA unless otherwise noted.
Advertisement