Alexander, Zane, and Rhys
Robert Lee Zemeckis is an American film director, producer, and screenwriter, who for Disney, pioneered ImageMovers Digital Studios for the Walt Disney Company and directed the films: Who Framed Roger Rabbit and A Christmas Carol. He was also the producer of Mars Needs Moms. In January 2020, it was announced that he is set to direct the live-action remake of Pinocchio.

Zemeckis was born on May 14, 1951, in Chicago, Illinois and attended a Catholic grade school and Fenger Academy High School. He attended Northern Illinois University and gained early experience in film as a film cutter for NBC News in Chicago during a summer break and edited commercials in his home state. Later he transferred to the University of Southern California's School of Cinematic Arts in Los Angeles, California where he met writer Bob Gale and the two cowrote various screenplays, one of which would later become Back to the Future.

Since the late 1970s, Zemeckis has either directed, written, or produced a number of films that went on to achieve box-office success, such as 1941, Romancing the Stone, Death Becomes Her, Forrest Gump, Contact, House on Haunted Hill (1999), What Lies Beneath, Cast Away, The Polar Express, Beowulf, Welcome to Marwen, Gothika, House of Wax (2005), Last Holiday, and Monster House.

Robert Zemeckis at premiere of A Christmas Carol in October 2009. 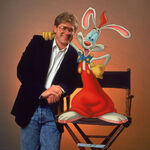