Disney Wiki
Register
Don't have an account?
Sign In
Advertisement
in: People, Singers, The Aristocats,
and 14 more

In the early 1960s, Disney songwriters Richard and Robert Sherman brought Lester to the attention of Disney's in-house record label. Lester's voice was heard on literally dozens of Disney's children's records such as the "Disneyland Story Reader" on Disney Read-Along book-and-record sets where she read the stories, acted out all the parts and reminded children to "turn the page" in their accompanying book. Her famous phrase “You will know it is time to turn the page when Tinker Bell rings her little bells like this." was heard by countless children of a generation. Her singing voice was also heard on the song "Hippity Hop" from the Disney album Peter Cottontail Plus Other Funny Bunnies and Their Friends.

She would provide the voice of Karen in the Story and Song from The Haunted Mansion record opposite Ron Howard and the voices of Piglet and Roo on some of the early Winnie the Pooh records.

Her "Storyteller" album for The Aristocats was nominated for a 1970 Grammy Award, she would provide the uncredited singing voice of Eva Gabor's animated characters in Disney's The Aristocats and The Rescuers.

She was also a caroler in the Walt Disney's Wonderful World of Color episode, "Holiday Time at Disneyland".

Outside of Disney, Lester is known for her role Miss Jessica in the 1970 Rankin-Bass TV special, Santa Claus Is Comin' to Town. She also provided voice-over work for commercials and vocal performances in House of Bamboo, Lisbon, The Three Lives of Thomasina, The Famous Adventures of Mr. Magoo, and The Funny Company. She also had small roles in The Sword of Ali Baba, The Ghost and Mrs. Muir, That Girl, and Night Gallery.

In her later years, Lester published two novels, The Twenty Dollar Christmas and Heaven's Gift, as well her autobiography Lingerie For Hookers In The Snow: An Audiography Of A Voice Artist.

Lester died of cancer on Tuesday, June 14, 2005 at St. Joseph's Hospital in Burbank, California. She was 80 years old. 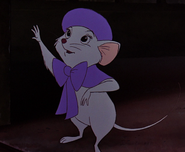