Asphyxiation due to suicide by hanging

Robin McLaurin Williams was an American stand-up comedian and actor, best known for his roles as Mork in Mork & Mindy from 1978 to 1982, Peter Banning / Peter Pan in Hook, Alan Parrish in Jumanji, Sean Maguire in Good Will Hunting (for which he won an Academy Award for Best Supporting Actor), Daniel Hillard / Mrs. Doubtfire in Mrs. Doubtfire, Robert "Bob" Munro in RV, and Theodore Roosevelt in the Night at the Museum franchise. He also voiced Batty Koda in FernGully: The Last Rainforest, Fender Pinwheeler in Robots, Lovelace and Ramón in the Happy Feet franchise, and Dennis in Absolutely Anything.

Williams was given the role of Ariel's dolphin friend, Breaker, in The Little Mermaid. However, when Breaker's role in the film was scrapped, he left the film.

Williams was asked to voice the Genie in the Disney animated film Aladdin, shortly after lyricist Howard Ashman passed away. In gratitude for his success with the Disney-produced Touchstone film Good Morning, Vietnam, Williams agreed to take the role for SAG scale pay ($75,000), on condition that his name or image not be used for marketing, and his (supporting) character not take more than 25% of space on advertising artwork, since Toys was scheduled for release one month after Aladdin's debut. Additionally, Williams believed the character's voice was his property and did not want it to be imitated.

Out of financial concern, the studio went back on the deal on both counts, especially in poster art by having the Genie in 25% of the image, but having other major and supporting characters portrayed considerably smaller.

Williams and Disney had a bitter falling out, resulting in Dan Castellaneta taking over as the voice of Genie in The Return of Jafar and the Aladdin television series. Castellaneta was also hired for Aladdin and the King of Thieves and had completed recording all his lines. Disney's Hyperion book, Aladdin: The Making of an Animated Film, listed both of Williams' characters, "The Peddler" and "The Genie", ahead of main characters but was forced to refer to him only as "the actor signed to play the Genie".

When Jeffrey Katzenberg was fired from Disney and replaced by former 20th Century Fox production head Joe Roth (whose last act for Fox was greenlighting Williams' film Mrs. Doubtfire), Roth arranged for a public apology to Williams by Disney. Williams agreed to perform in the Hollywood Pictures film Jack, directed by Francis Ford Coppola, and even agreed to voice Genie again for the King of Thieves sequel (for considerably more than scale), replacing all of Castellaneta's dialogue.

When Williams re-teamed with Doubtfire director Chris Columbus for Touchstone Pictures' Bicentennial Man in 1999, Disney asked that the budget be cut by approximately $20 million and when the film was released on Christmas Day, it flopped at the box office. Williams blamed Disney's marketing and the loss of content the film had suffered due to the budget cuts. As a result, Williams was again on bad terms with Disney and Castellaneta was once again recruited to replace him as the voice of Genie. The 2004 DVD release for Aladdin has no involvement whatsoever from Williams in the bonus materials, although some of his original recording sessions can be seen.

Even though Jim Meskimen had been cast as Genie's new official voice actor in 2008, Williams eventually made peace with The Walt Disney Company again and in 2009, he agreed to be inducted into the Disney Hall of Fame, being honored as a Disney Legend.

Williams was found unconscious in his home in an unincorporated area just outside Paradise Cay, California, at around 11:55 AM PDT on August 11, 2014, and was pronounced dead at 12:02 PM. The Coroner Division of Marin County said the death appeared to be a suicide from hanging. This was confirmed in November 2014 with evidence such as that Robin Williams had used a pocketknife to slice his wrists before the suicide and finally used a belt wrapped around his neck to kill himself. No suicide note has been found.

It was revealed that Williams had been diagnosed with Parkinson's disease in 2013 and was suffering from deep paranoia and depression. 6 weeks later, it was determined by a toxicology report that the cause of death was a suicide from asphyxiation by hanging. It was also discovered on Robin's death certificate that the very day after his death, Williams was cremated and his ashes were dumped into the San Francisco Bay as per a request Williams made in his will. An autopsy revealed that Williams had been suffering from "diffuse Lewy body dementia", which had been misdiagnosed as Parkinson's. This may have contributed to his depression.

Williams' wife, Susan Schneider, said, "I lost my husband and my best friend, while the world lost one of its most beloved artists and beautiful human beings. I am utterly heartbroken." Fellow Disney Legend, Steve Martin, tweeted, "I could not be more stunned by the loss of Robin Williams, mensch, great talent, acting partner, genuine soul." US President, Barack Obama, said Williams was "one of a kind," and someone who "ended up touching every element of the human spirit." Scottish comedian Billy Connolly, who was a personal friend of Williams, said that Williams had called him the night before the suicide and had given him a subtle goodbye.

On his death, Disney CEO Robert Iger released the statement:

"We're deeply saddened by the loss of Robin Williams, a wonderfully gifted man who touched our hearts and never failed to make us laugh. An incredible actor and a comedic genius, Robin will always be remembered for bringing some of the world's favorite characters to life, from his zany alien on ABC's Mork & Mindy to the irascible genie in Disney's Aladdin. He was a true Disney Legend, a beloved member of our family, and he will be sorely missed. We join Robin's friends and fans everywhere in mourning, and offer our thoughts and condolences to his family during this difficult time."[1]

Before the first performance of the Broadway show Aladdin after Williams' death, James Monroe Iglehart, the actor who played the Genie led the audience into singing "Friend Like Me" in tribute.

Shortly after Williams' death, Disney Channel and its sister channels Disney Junior and Disney XD all aired the original Aladdin over the course of a week, with a dedicated drawing of the Genie at the end of each airing before the credits.

At the 2015 Disney Legends ceremony, Ne-Yo sung a cover of "Friend Like Me" in tribute.

Awards and Nominations for Robin Williams' roles in Disney Films

Genie
(Aladdin; Aladdin and the King of Thieves; Great Minds Think 4 Themselves; Disney's MathQuest With Aladdin) 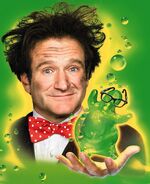 Dan Rayburn
(Old Dogs)
Add a photo to this gallery

Robin Williams behind the scenes of Aladdin.

Williams with Genie on the cover of Disney Adventures (September 1996)

Robin Williams behind the scenes of Aladdin and the King of Thieves.

Williams with Ursula on the cover of Disney Adventures (December 1997)

Robin Williams and Billy Crystal at the Sony afterparty in April 2006.

Robin Williams and daughter Zelda at premiere of Old Dogs in November 2009.

Robin Williams and Sarah Michelle Gellar speak onstage at The Crazy Ones panel during the Summer 2013 TCA Press Tour.

A memorial for Robin Williams in San Fransciso.
Add a photo to this gallery

Retrieved from "https://disney.fandom.com/wiki/Robin_Williams?oldid=3908090"
Community content is available under CC-BY-SA unless otherwise noted.