Singing, performing, adventuring, being with his Uncle Kermit, playing with Sweetums

Robin the Frog is a small Muppet frog. He is Kermit the Frog's nephew. He debuted in the 1971 TV special The Frog Prince and has appeared in almost all Muppet productions since The Muppet Show (but is notably absent in Muppets Tonight). One of Robin's most famous moments was singing "Halfway Down the Stairs", a song based on a poem by Winnie the Pooh creator A.A. Milne. He also has an important role in episode 212 of The Muppet Show, when he was feeling sad for being so small until the guest star Bernadette Peters and all of Robin's Muppet friends sing the song "Just One Person" to cheer him up. He loves to spend time with his Uncle Kermit.

According to the Muppet Babies episode "Close Encounters of the Frog Kind", his mother is Kermit's older sister. 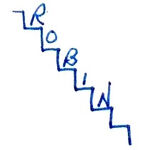 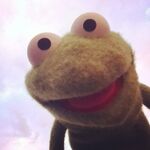 Robin in the Original Muppet Babies

Robin in the New Muppet Babies

The Muppets Babies Frog Scouts with Kermit and Carlos