"Ain't no thing like me, except me!"
Rocket Raccoon is a member of the Guardians of the Galaxy. He is an intelligent, anthropomorphic raccoon, who is an expert marksman and master tactician.

He appeared in the Marvel Studios film Guardians of the Galaxy and its upcoming sequel. Rocket has also appeared in various Marvel productions.

The character was created by Bill Mantlo and Keith Giffen, and consciously inspired by the Beatles song "Rocky Raccoon".

Rocket is easily enraged and aggressive. He often gets insecure when people do not treat him as an equal and give him the same respect they would give a common rodent.

Rocket is a genetically engineered talking raccoon who wears an orange battle suit. In addition to being genetically altered, Rocket is shown to have cybernetic implants within his body.

Subject 89P13 was the result of illegal genetic and cybernetic experiments on a lower life form. He called himself Rocket when he began his career as a bounty-hounter. As a result of his illegal activities Rocket was imprisoned in a twenty-two occasions; but from all he managed to escape. Rocket and Groot were to Xandar in search of employment. Here, they found Star-Lord, who weighed about a reward of forty thousand units. As they desired that reward, he and Groot were involved in the fight between Star-Lord and Gamora for the Orb.

Due to the scandal they caused in Xandar; he, Groot, Gamora and Star-Lord were sent to Kyln. Upon arrival, Rocket claimed that he had escaped from twenty-two prisons before. Rocket and Groot saved Star-Lord, who was being harassed by another prisoner. He informs the rest of the prisoners Star-Lord is their booty and if they wanted him they had to pass over them. That same night, Rocket saw Star-Lord get up to save Gamora. He advised not interfere, however Quill saved Gamora from Drax and the other prisoners. Then Rocket, Gamora, Groot and Star-Lord decide to join to escape, sold the Orb and to divide the profits between the four.

The next day, while Rocket, Gamora and Star-Lord planned the escape, Groot decides to skip to the last step plan and cut off the quarnyx battery. Rocket was very frustrated due to Groot's action. Drax then stepped in and got him a weapon with which he could defend itself. Eventually, Rocket, Star-Lord, Gamora, Groot and Drax manages to escape. During the trip, Rocket built bombs to spend time (despite the displeasure of Star-Lord). Arriving at Knowhere, the group went to Boot Jemiah to hang out. After being pleasantly playing with Drax and Groot, Rocket gets drunk and fights with Drax. Rocket was very upset because he hated being called "Rodent" and "Vermin"; Star-Lord calms him saying that he should only support one more night and he will be rich.

Peter's efforts were almost thrown away when the Collector  called Rocket "Groot's pet". The Collector told them the story of Infinity Stones but he was not interested because he wanted to have his pay. When the Collector was preparing the pay, Carina decides to grab the Orb with the purpose of killing the Collector, which caused a huge explosion. After the explosion, Rocket ask Star-Lord why he still had the Orb in his possession. He also suggested to deliver the Stone to Ronan. He along with Gamora and Star-Lord fled when Ronan and his troops arrived in Knowhere looking for the Orb. He watched as Nebula exploded the ship where Gamora was traveling. Rocket advised Star-Lord to left Gamora to die, however Star-Lord decide to ignore it and save Gamora again. Rocket the watched as Yondu abduct Star-Lord and Gamora.

Rocket returned to Knowhere annoyed by Star-Lord's attitude. He told Groot they should flee before Ronan find them. Groot instead did not want to leave Gamora and Star-Lord. Rocket was very skeptical but he is finally convinced by Groot. He threatens Yondu and Ravagers by exploit their ship, if they did not free Gamora and Star-Lord; unaware that Yondu and Star-Lord made a deal. Before the final battle, the team gathered to devise a plan which would defeat Ronan and they would get the Orb for Yondu.

During the battle, Rocket was entrusted to protect civilians and prevent an attack of Necrocraft to Xandar. As the others were defeated by Ronan, he then decides impact the Milano against Dark Aster. Groot knowing that the ship would impact in seconds against Xandar, he decides to create a shield with his body to protect his friends. Rocket asks him not to do it, but Groot already had taken its decision. After the impact, while he mourned the loss of his best friend, Ronan appears without any damage. Rocket tried to attack but only he is blasted by Ronan. When Ronan was ready to destroy Xandar, Star-Lord distracts him by a dance off allowing Rocket and Drax repair the Hadron Enforcer.

He and Drax destroy the Universal Weapon by a blast and allowing Quill grab the gem, which almost kills him. Gamora, Rocket, and Drax come to his aid and the four use the Orb's power to blast Ronan, killing him. After the battle, they learn that Quill descends from an ancient alien race. Rhomman Dey also informs them that their criminal records were erased. The Guardians left Xandar in the rebuilt Milano accompanied by a twig recovered from Groot, which was already regrowing.

Rocket Raccoon, along with the other Guardians of the Galaxy, comes to Earth in order to hunt down Michael Korvac. Template:Sec-stub

Rocket Raccoon was a master strategist with a laser gun and rocket pack. But he is not actually a Raccoon his alien species just resemble the Earth Raccoon. He is is a leading member of the Guardians of the Galaxy alongside Star-Lord, Drax the Destroyer, Gamora and Groot and Nova, whom he served as a mentor for. 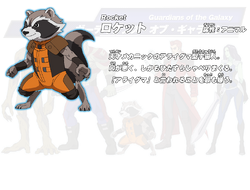 Guardians of the Galaxy (Animated series) 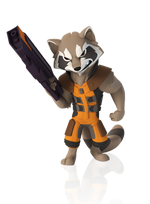 Rocket appears alongside the rest of the Guardians in the Disney INFINITY: 2.0 Edition Guardians of the Galaxy Play-set by protecting Knowhere from Ronan the Accuser and his Sakaaran forces.

Rocket is also playable in the Avengers playset if you collect all his crossover coins.

The Disney Wiki has a collection of images and media related to Rocket Raccoon.

Retrieved from "https://disney.fandom.com/wiki/Rocket_Raccoon?oldid=1697104"
Community content is available under CC-BY-SA unless otherwise noted.