A red penguin with a large black pirate's hat, bushy black eyebrows, a beard, and a jacket

Avast and ahoy me hearties!

Rockhopper (also known as RH or Captain Rockhopper) is a friendly pirate and a sailor who regularly sails to Club Penguin Island mostly after his ship, The Migrator. He is one of the Club Penguin Mascots. He is always accompanied by his Red Puffle, Yarr. His ship is only docked at the Beach on special Club Penguin parties or events. He keeps a journal of his adventures, and sells rare items brought over from Rockhopper Island. Rockhopper's favorite Club Penguin game is Mancala.

In 2009, Rockhopper appeared at Walt Disney World along with a light blue penguin, possibly Bambadee.

Rockhopper with his pet Puffle Yarr 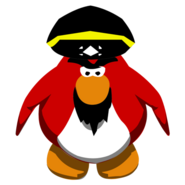 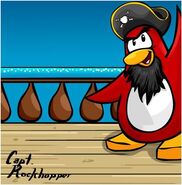 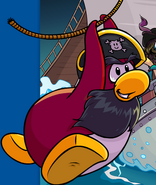 Retrieved from "https://disney.fandom.com/wiki/Rockhopper?oldid=4071973"
Community content is available under CC-BY-SA unless otherwise noted.