Disney Wiki
Register
Don't have an account?
Sign In
Advertisement
in: Characters, The Incredibles characters, Raccoons,
and 8 more

Lasers, blobs, fire, getting attacked, Jack-Jack, not getting its food

Rocky is a minor character that appears in the 2018 Disney/Pixar animated film Incredibles 2. It is a raccoon seen stealing food from the Parr's trash can, leading to Jack-Jack using his powers to stop it.

Rocky is seen as a mischievous animal. When it is first seen it is trying to get itself some food from a trash can, however, it is soon interrupted by Jack-Jack. Due to this, Rocky is also shown to have a temper as it tried to fight Jack-Jack after Jack-Jack tossed it's food away. It is proven to be fearless and persistent as shown when it continues fighting Jack-Jack even after seeing his powers. It is also shown to be intelligent as shown when it knocks over a grill to put out Jack-Jack's fire powers.

Rocky looks like your standard raccoon. It has gray fur with a light/dark gray-striped tail. It has black hands, feet, and claws. Her stomach is light gray along with its face. It has brown eyes with black fur surrounding it's eyes, which prompted Jack-Jack to think it was a bad guy. Around the black fur is white fur above the eyes, with its ears being white as well.

While Bob talks with Helen on the phone, the raccoon and Jack-Jack are seen on opposite sides of the screen door, Jack-Jack indoors/Rocky outdoors, glaring at each other face-to-face, possibly wanting to fight again.

In the game, the raccoon is a fight for Jack-Jack, but it has two other raccoons to help it and cheer for as it fights the super baby. Rocky's boss title in the game is "Raccoon", which might be due to the game being released before the Incredibles 2 album was, where its actual name was revealed by then. 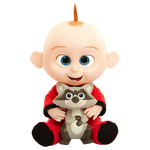