Francis, the Robinsons' youngest son, finds a young baby elephant in the jungle all by himself. After the dogs, Duke and Turk, save them from the tiger on the island, Mother allows Francis to keep him, who is later proven very instrumental in helping the Robinsons build their treehouse, and names him Rocky. He, with Francis' new pet monkey on his back, even helps Fritz and Ernst pull their sailboat to the water so as to allow them to find a way off the island.

On the day of the Robinsons' new holiday, Rocky is one of the animals who participate in the race, with Francis riding him, along with Turk (ridden by Francis' monkey), Lightning the donkey (ridden by Fritz), Clementine the ostrich (ridden by Ernst), and Duchess the zebra (ridden by Roberta).

In the end, after the pirates' deaths, and as Ernst travels to England with Roberta's grandfather, Captain Moreland, to continue his education there, Rocky can be seen running away along with Clementine, Duke, Turk, and Duchess as Francis tries to bring them back. 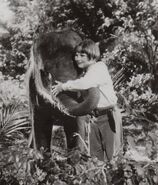 Retrieved from "https://disney.fandom.com/wiki/Rocky_(Swiss_Family_Robinson)?oldid=4408388"
Community content is available under CC-BY-SA unless otherwise noted.