Disney Wiki
Register
Don't have an account?
Sign In
Advertisement
in: Characters, Shake It Up characters, Teenagers,
and 13 more

Shake It Up: Made in Japan

Logan Hunter (ex-boyfriend)
Raquel "Rocky" Oprah Blue[2] is one of the main protagonists and the lead deuteragonist on Shake It Up where she dances on the local teen dance show Shake It Up, Chicago! However, in "Ty It Up", she was kicked off the show because the new producer wanted fresh, new faces. She is the daughter of Marcie Blue and Curtis Blue and the younger sister of Ty Blue. She lives in an apartment with her family in the suite above her best friend, CeCe Jones, and her family. Her father is a doctor who later returned in the second season after being away on business trips and working overseas. She attends John Hughes High School in Chicago, Illinois.

Rocky is portrayed by Zendaya and by Jasmyn Ramos as Little Rocky ("Shrink It Up", "Judge It Up").

Rocky is an extremely pretty girl, who is described as generous, funny, smart, friendly, and overachieving. She values learning and has a perfect attendance record. Unlike her red-headed best friend, CeCe, she values school and takes honors classes. She is extremely intelligent, but is more book-smart rather than street-smart, the opposite of CeCe. She is a vegetarian and believes strongly in human and animal rights. Rocky is quite reserved and thinks logically before acting, which causes her to be pushed around by CeCe to take more risks. She is always trying to get CeCe out of trouble, which often gets them both into trouble. Rocky loves dancing and wants to pursue it, much to the early disapproval from her father ("Doctor It Up"). She likes "Pride and Prejudice," but thinks it is about romance. She is also called a goody two shoes by many of the other characters.

In Season 1, Rocky is very outspoken and expresses herself in quiet and respectful ways (excluding "Wild It Up"), but in Season 2, it seems that more of her assertive and snarky side comes out. For example, in "Split It Up", she was breaking mugs with Tinka, and in "Weird It Up", she warns CeCe saying, "CeCe, if you don't apologize, you're gonna have to deal with my super-bad-wheel-of-punishment-time!" She also has a somewhat strange (and semi-sadistic) sense of humor, finding several inappropriate situations funny. In Season 3 Rocky is unable to attend school for the first time ever as she is quarantined in Lock It Up after she chose to help at the hospital.

Change of Personality Over Time

In Season 1 Rocky was cautious, unsure of herself, smart, and hardworking young girl.

In Season 2 Rocky was a little more authoritative and confident. She often would stand up to others and take charge in situations that only CeCe would have done in the first season.

In Season 3, Rocky is one of the most confident characters on the show. She is outgoing and over-achieving, but still with her sense of fairness.

Rocky was at first nervous to audition for Shake It Up, Chicago!, but she was convinced to tryout by Ty and CeCe. Rocky had an easy time at the audition and was one of the teen dancers chosen to be on the show. However, CeCe was overcome by her stage fright and ran away before completing her audition. Rocky didn't want to be on the show without CeCe, so she handcuffed CeCe to her wrist and forced her to dance with her. Although the stunt got them in trouble, CeCe was hired and they both became dancers on the show.

During season three, Rocky must find other options than Shake It Up, Chicago! to dance as the Shake It Up, Chicago! studio has burned down. Although Rocky keeps herself busy by dancing at parties and with the spirit squad, she does miss dancing on Shake It Up, Chicago!. When the Shake It Up, Chicago! studio is rebuilt, it is under new management and all the dancers must be rehired. Rocky is confident about her audition but is not hired as a dancer. Although Rocky tries to pretend that she isn't bothered by this, CeCe sees through her act and continues to help her earn her spot back. After saving the executive producer's life, Rocky is offered a spot on Shake It Up, Chicago!, however, she refuses as she wants the spot, because of her dancing skills, not what she did for Phil. Phil allows her to re-audition, but Rocky messes up. Later on, Phil admits that it was a mistake to not put Rocky back on the show right away, but he didn't want to admit it. Grateful to be acknowledged for her talent at dancing, Rocky accepts and returns to the show as a dancer.

CeCe is Rocky's best friend, neighbor, classmate, and fellow dancer on Shake It Up, Chicago. While they both harbor a love for dancing, they have different personalities: Rocky is a good student who likes to stay away from trouble, while CeCe is often dim-witted, wild, and usually has Rocky do her homework. It was revealed in "Shrink It Up", that they met in dance class when they were in first grade, where CeCe was close to quitting until Rocky convinced her to stay. They've been best friends ever since. Rocky is usually seen entering the Jones' apartment by climbing through the window via the fire escape along with her greeting ("Hey, hey, hey!"). CeCe usually gets Rocky into interesting adventures and in trouble. They're opposites, but that's how their friendship works. (See: ReCe)

Ty is Rocky's older brother. Rocky knows a few embarrassing things about him and at times, she threatens to tell the world about them ("Show It Up"). They are both talented dancers. Their dad, Curtis Blue, hopes that they'll both become doctors, even though Rocky wants to become a dancer and Ty wants to be a rapper. They work together (along with CeCe) to showcase their talent and dedication to their dad by setting up a surprise performance for him in "Doctor It Up". Ty also tries to keep their dad from turning on the television to avoid seeing Rocky on the show. There are instances where Ty looks out for his little sister, such as collecting signatures at school to sponsor her in the dance marathon in "Give It Up" and supporting her modeling career in "Model It Up". They do fight sometimes but always are there for each other in the end. (See: Ry)

Flynn is CeCe's little brother and he knows Rocky since she is his older sister's best friend. He thinks of her as another older sister. He loves her and missed her almost immediately after she "left" in the limousine to the airport in the episode: "Model It Up". It was thanks to her advice that he decided to take off on an adventure, tagging along in his sister's suitcase while they were en route to Los Angeles in "Shake It Up, Up & Away". Rocky helps CeCe babysit Flynn in episodes throughout the seasons. Although he can get along with her, he does not sympathize with her when she goes along with CeCe's adventures. (See: Flocky)

Deuce is one of Rocky and CeCe's close friends. They are usually seen hanging out at school or at Crusty's. He was the first person to give Rocky and CeCe the flyer containing information on auditions for the dance show, Shake It Up, Chicago. He was upset when Rocky said she was taking the modeling job in "Model It Up", where he revealed that she's the one who maintains his eyebrows. Rocky came to Deuce for help when she needed to find a game for a poor boy during Christmas in "Jingle It Up". Rocky accidentally kissed Deuce, as she had a crush on his identical cousin, Harrison, and had mistaken him for Harrison. She tried not to throw up after finding out. They continue to be close friends, helping each other out in the third season. (See: Reuce)

Rocky is a "frenemy" of Gunther's, fellow Shake It Up, Chicago dancer, and schoolmate. They don't often get along and like to throw insults at each other, but they can be friendly at times. Rocky agreed for her and CeCe to go to his house for Vatalihootsit Day ("Vatalihootsit It Up"), where he says he thinks she's the smartest girl in their school. In "Show It Up", she asked him and his sister, Tinka, to join her team to defeat Candy Cho; however, he and Tinka left to join Candy's group. In "Break It Up", they are seated together and her cast shows Gunther's signature. He thought she was some sort of "witch" in "Kick It Up". He helps her with her modeling in "Model It Up". In "Split It Up", Rocky is jealous of CeCe and Gunther dancing on Good Morning Chicago and initially agrees to help Tinka get CeCe sick so she can't dance on the show. (See: Runther)

Tinka is Rocky's former frenemy. They don't often get along and Tinka takes every opportunity to insult Rocky. They were friendly in the episode "Vatalihootsit It Up" when Rocky accepted her invitation to their home. Rocky approaches her and Gunther in "Show It Up" to suggest that they join as one team to beat Candy Cho in the talent show. In "Split It Up", Tinka seeks help from Rocky after the two of them were left out of the featured dance on Good Morning Chicago. She tries to make her feel jealous about CeCe and Gunther dancing on the morning show together. In "Tunnel It Up", Rocky and Tinka (along with Cece) seem to get along apart from the odd insult. They become friends in "Fire It Up " after Gunther moves to the old country and she tries to win Rocky and Cece 's friendship. They've continued on as friends, with Tinka even helping CeCe to get Rocky back on Shake It Up, Chicago!. (See: Ronka)

Logan and Rocky first meet in Oh Brother It Up. Rocky and Logan show a really friendly connection when they meet and Logan hires Rocky to work at Bob's Kabobs. Rocky and Logan seem to like each other a lot. However, in a later episode, Clean It Up, Rocky and Logan instead show a romantic connection, as they danced together, and kiss each other on the cheeks. She will try to convince CeCe and Logan to get along so that she and Logan can date in Love & War It Up. In the same episode, Logan becomes Rocky's boyfriend, but they break up since CeCe agreed to try to get along with Logan but he didn't want to so Rocky broke up with him. (See: Rogan)

Rocky and CeCe, being the main protagonists, are the only two main characters to appear in every episode. 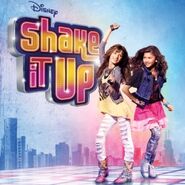 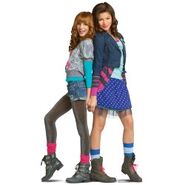 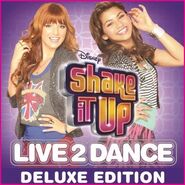 Rocky as a goth

Rocky gives Deuce a kiss on the cheek

Rocky and her Dad